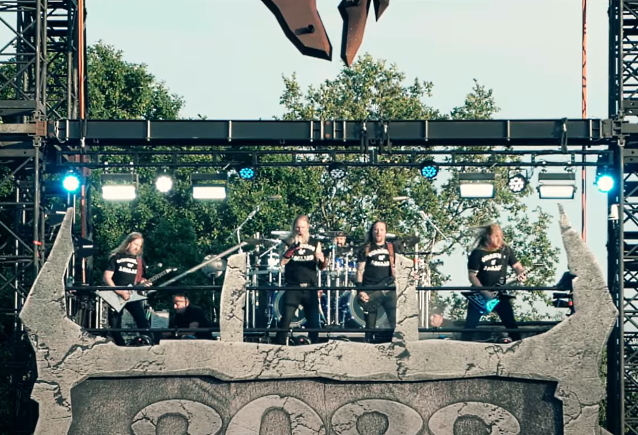 Swedish melodic death metallers AMON AMARTH played a surprise set at this year's Wacken Open Air festival on August 4 in Wacken, Germany. An official video recap of the performance is available below.

In a recent interview with Ireland's Overdrive, AMON AMARTH guitarist Olavi Makkonen spoke about the surprise set, saying: "We knew about it for about six months. And you know what? It was kept as a pretty solid secret for the best part of five and a half months or so. Which is not bad, considering how many people are involved in events like that."

According to Makkonen, the stripped-down performance was "more stressful" than a regular AMON AMARTH show because "there is a lot of pyro and lights that hides me [at a proper AMON AMARTH gig] if I want to be hidden for a while. But this was just us and the instruments and it was an intense feeling that so many eyes were on us in the sunlight."

He continued: "The original plan was that we wanted to play the smallest stage they had but there was a lot of concern for the safety of people, so it was decided that would put a small stage in the middle of the main two stages in the arena. It was a really awesome experience and we all had such a good time. We really didn't know how people were going to react but now looking back… it was incredible."

Heathens! Thank you for joining us today on the glorious battle ground of @Wacken for a surprise set. Until next time! - Amon Amarth (Guardians of Asgaard) ⚔️🛡 pic.twitter.com/paLw4dC1ib

Our raid on Wacken Open Air was a success! Thank you for helping us celebrate the release of ‘The Great Heathen Army’. Stream our latest album now at https://t.co/cVsJAelZMv ⚔️🛡 pic.twitter.com/vraeQr8lyg