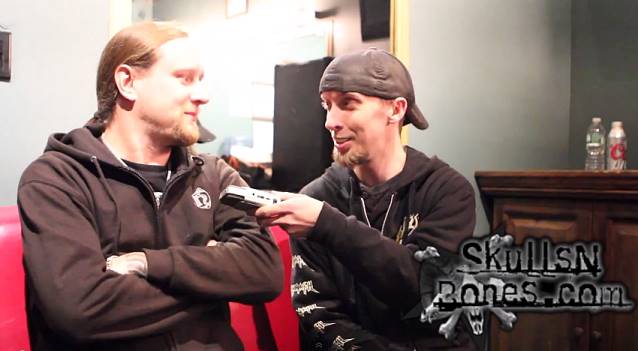 On February 4, Metal Mark of SkullsNBones.com conducted an interview with bassist Ted Lundström of Swedish death metallers AMON AMARTH. You can now watch the chat below.

AMON AMARTH premiered its stunning production video for the track "Father Of The Wolf" on January 17 at the first show of the band's U.S. tour in Las Vegas, Nevada. The song is taken from the group's ninth studio album, "Deceiver Of The Gods", which sold around 17,000 copies in the United States in its first week of release to land at position No. 19 on The Billboard 200 chart. The record arrived in stores on June 25, 2013 via Metal Blade Records.

In Germany, "Deceiver Of The Gods" entered the Top 100 chart at No. 3, the official Media Market/Saturn chart at #3 and the German Media Control Weekend Trend chart at No. 2.

In the U.K., the record entered the official album chart at No. 67, the Rock/Metal chart at No. 4 and the Independent chart at No. 14, marking the highest U.K. chart placements for the band yet.

"Father Of The Wolf" video: