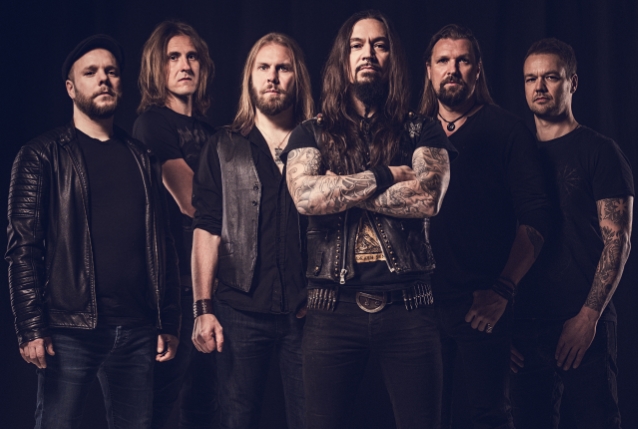 Finnish melancholic progressive metallers AMORPHIS have entered Sonic Pump studios in Helsinki to begin recording their fourteenth album. The follow-up to "Queen Of Time" is tentatively due later this year via Nuclear Blast.

"Queen Of Time" came out in May 2018 via Nuclear Blast. The follow-up to 2015's "Under The Red Cloud" included the use of real strings, flutes, orchestral arrangements and even choirs. In addition, this was the first time that people were able to hear AMORPHIS lyricist Pekka Kainulainen on an album, as he contributed a speech in Finnish.

AMORPHIS recently released a shaped vinyl single, "Brother And Sister", limited to 666 copies via Nuclear Blast. The band also started the pre-order for its special 30th-anniversary vinyl box set, the "Vinyl Collection 2006 – 2020", which will contain all their albums featuring Tomi Joutsen on vocals since the 2006 classic "Eclipse". The box set will be released on May 21, 2021 via Nuclear Blast, and will also contain the exclusive double live album "Live At Helsinki Ice Hall". The concert during which the album was recorded took place on December 7, 2019, and it was also AMORPHIS's last live performance in Finland before the COVID-19 pandemic. The live album contains 15 tracks in total with a playtime of around one and a half hours. The live album will also be available digitally and on 2CD.

Two years ago, Joutsen said that "Queen Of Time" was the "highlight" of his career thus far in AMORPHIS. Joutsen joined the Finnish melancholic progressive metallers in 2004 as replacement for Pasi Koskinen and has been widely credited for the band's subsequent career rebirth that started with his first AMORPHIS album, 2006's "Eclipse". The band's latest two studio albums, 2015's "Under The Red Cloud" and "Queen Of Time" have been particularly well received, enabling the band to play in territories it had not reached on previous tour cycles.

"I think this latest album ['Queen Of Time'], I think it's been kind of the biggest highlight in a way," Joutsen said. "Of course, the first show that I played with AMORPHIS was a big moment and the first record we did, 'Eclipse', it was a big thing and the first tours in Europe and the States, but I think with this album, we have made some success. Something really good happened with this album. I can feel there's some kind of hype, if you can call it that. It's not like a hugely successful [thing]. I've been with the band for [a decade and a half] years, and now I feel like something big might happen in the future."