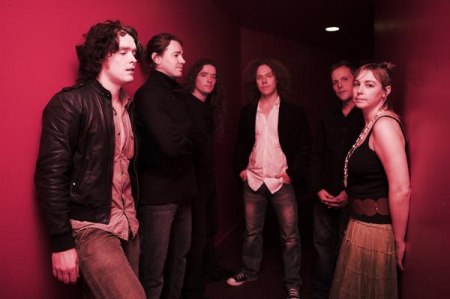 U.K.'s ANATHEMA will tour North America for the first time ever as special guests to BLACKFIELD on the East Coast/Canadian leg of their tour.

This trek comes at the perfect time for ANATHEMA, which is currently in the studio recording a new collection of songs.

ANATHEMA released its eighth studio album, "We're Here Because We're Here", in May 2010 via Kscope Records. The self-produced CD was mixed by Steven Wilson (PORCUPINE TREE) and features the exquisite string arrangements of Dave Stewart (STEWART/GASKIN, PORCUPINE TREE) and mastering skills of legendary Jon Astley (THE WHO, LED ZEPPELIN). The song "Angels Walk Among Us" features subtle backing vocals by Ville Valo of HIM.

"'We're Here Because We're Here' is ANATHEMA's most expansive album to date and by the far best thing we've ever done," commented ANATHEMA's Danny Cavanagh. "Not only have we improved as writers, but because we took our time, we had the opportunity to select the very best material and concentrate on it. We gave the songs the chance to breathe and come alive by themselves and it's ended up being magical — every song is as good as the rest of them. This album features the best performances by the band ever; Vincent's [Cavanagh] greatest vocals and John's [Douglas, drums] and my best writing."

ANATHEMA's Vincent Cavanagh went further in explaining the origins of the album's enigmatic title: "The title 'We're Here Because We're Here' is inspired by a song that was first heard across the Allied trenches of World War One. Sung to the tune of 'Auld Lang Syne', the song served as a defiant rallying-call keeping up the morale of those who had to endure the incessant carnage and almost unimaginable horror. The spirit behind those words, and the deep questions they raised immediately struck all of us. Therefore we have appropriated these words to reflect the spirit and bond that all six members of the group have with each other. We have shared some incredible experiences, on all levels, and the fact that we have emerged stronger, more determined, and confident in our common vision is a testament to our resilience, both as individuals and collectively."

Danny continued: "The bond is deeper than the music and you might say the direction of music is a product of our connection to each other; a real family in every sense of the word."