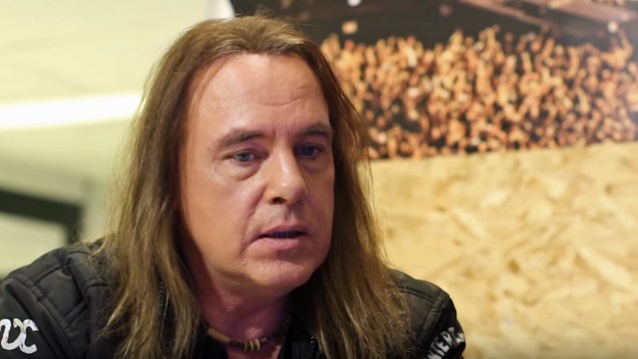 On whether he expected such a strong turnout to the "Pumpkins United" shows:

Andi: "No, not at all. We thought, 'Okay, if we bring in the old/new singer [Kiske] and the old/new guitarist [Hansen], maybe we'll be happy to double [the attendance].' But the press and everybody else, a year before that, was talking about it and people were getting nosy and people were getting thrilled. You realize more and more people were buying tickets. There were so many countries that we had to double-up the venues. We were like, 'What the fuck is going on?' Pardon my French. [Laughs] It was ridiculous. Suddenly you end up in the bigger and bigger concert halls until you finally play the biggest concert halls in the country. Like São Paulo, they don't have a bigger concert hall and we played it twice. It has been a dream come true."

On how HELLOWEEN chooses which songs to play every night:

Andi: "It very much depends in the moment on Michael [Kiske] because Michael is having the flu since the beginning of South America. Because it was a big mistake, we did not make any break. After South America, we directly dove into the European tour. That was a mistake because he would have needed two weeks' break to finally get healthy again, get rid of the flu. Now he's still struggling with the flu. Yeah, what can you say? It very much depends on Michael. If he feels good, certain songs will be in. If he feels bad, certain songs will fly out."

Andi: "It's always a matter of taste, I would say. Back in the days when I started out with HELLOWEEN, there was no question about which style you have to follow. If you would have followed the QUEENSRŸCHE way, we would lose, because there's already QUEENSRŸCHE and this style of music was already occupied. And there was grunge going on. So, people tended more to that grunge sound and more from the breast singing and more harsh, a bit more hard rock, that's what we did, only when you look at where I come from, I come from a band called PINK CREAM 69. I was singing more like Michael Kiske, but, joining the band in 1994, there was no choice. You better stay away from that technique because it was dead. To survive you have to find, again, that small path to survive and hopefully people accept the 'new singer' and blah, blah, blah. At the end of the day, Michael Weikath [and I] just sat down together and realized, 'Okay, we have to make metal again. But, it has to be different than the 'Keeper Of The Seven Keys'.' Because you can't beat 'Keeper Of The Seven Keys'; they are great albums, they are the masterpieces of the band. You cannot do another masterpiece, it's impossible. They are already there. Nearly every band has one or two masterpiece albums and some try to beat them and lose. I've seen that with all my idols who tried to copy themselves and copy the big success they had with certain albums. They lost sooner or later because you cannot beat it. People love these albums for the particular reason that back in the day, it's when these albums were released, they were young, they had the first KISS, they had the first FALCO, whatever, and now you come with another album, even if it would be better, but they already had their first KISS, they already had their experience with their first F-word again [FALCO]. You compete against your albums and you can't beat them. That's why we chose to kind of go back on the metal track, but stay away from the heritage. Keep the legacy, but don't copy the heritage. That would have been the biggest mistake, I think. So now you have two HELLOWEENs. You have the old-style HELLOWEEN, which I really love, but never was able to sing it as good as Michael Kiske can because it's not my style anymore. Back in '94, I changed my style and I decided it's more from the stomach and more from the breast and less technique. That's my style nowadays, but I completely understand when people say, 'I like this more.' Or vice versa. It's always a matter of taste."

On whether Hansen will go back to GAMMA RAY and Kiske will return to his many projects after the "Pumpkins United" tour ends:

Andi: "I strongly don't hope so because in the moment, the chemistry feels really good and it feels going on like that forever. I don't know…I can't talk for the future, but in the moment, it's a lot of fun. Everybody is enjoying [themselves], I just wish that Michael gets healthy again and gets rid of the fucking flu. Because he's not able to enjoy it like I do, for example. I enjoy each and every city and it's, like, 'Wow, what's going on?' He's still 70 percent occupied with his flu and I feel a little bit sad for him. But I could see us going on for another one and a half, two years touring because the world is big. It's definitely one and a half, two years more of touring. Then, we have Kai, we have Weiki, myself, Sascha is writing good songs. We have a lot of good songwriters. An album would be a dream come true."