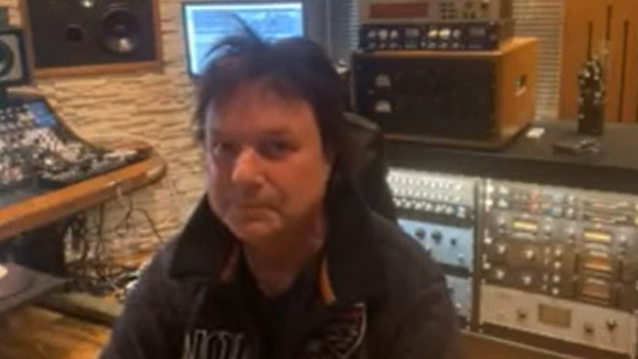 KING DIAMOND guitarist Andy La Rocque spoke to the "Heels And Quads" about the progress of the songwriting sessions for the band's long-awaited new album. Titled "The Institute", KING DIAMOND's first studio LP in 16 years is tentatively due in 2023 via Metal Blade. It will be made available as a two-LP horror concept story, with the second part arriving at a later date. Andy said (as transcribed by BLABBERMOUTH.NET): "[KING DIAMOND frontman and namesake] is focused on [MERCYFUL] FATE right now, but we've been talking a little bit about that. I sent him a bunch of songs in January that we started working on, arrangement-wise, in the springtime. But then MERCYFUL FATE came in between. So as soon as they're done with [the MERCYFUL FATE tour] in the fall, we're gonna pick that up again and continue. So we have a bunch of songs. And then also King will write a few songs too, of course. So there will be plenty of songs to put on the album, that's for sure. So, yeah, we're definitely working on it."

At this year's Bloodstock Open Air festival at Catton Park, Walton-on-Trent, United Kingdom, King spoke to Bloodstock TV's Oran O'Beirne about his plans for "The Institute". "Something with KING DIAMOND, we have a very special thing [planned] for that album," King said. "It's gonna be a two-album story. The release will be next year. And touring in the summer is the plan. But KING DIAMOND, we are building something that you will never have seen on a stage before — not that way. And with the light guy, he's never done it that way either. … It's very different, very sick. You will not have seen musicians standing on stage in that type of light. It's gonna be very dark. They have to learn to play in dark areas. It's crazy. I know that our light guy, he can't wait for us to do it. I showed him some pictures that have the kind of feelings I want, the kind of backdrops I want, stuff like that. … This is gonna blow people's minds when they see it, I am a hundred percent sure."

Back in November 2019, KING DIAMOND released its first new song in 12 years, "Masquerade Of Madness". A month later, La Rocque told The Metal Voice that he came up with the music for the track first before passing it off to King, who "needed to arrange a few things and change just a small few things for making it work with his vocals. And then, of course, he wrote the lyrics for it," the guitarist revealed. "So we [went] a little back and forth until he felt like, 'Okay, this is cool, man. This is the right key to sing in,' and all that."

La Rocque, whose real name is Anders Allhage, discussed his vision for the new KING DIAMOND album with The Metal Voice, saying that it will be filled with great "melodies, of course. Super important. Without melodies, there is no music," he explained. "I'm also envisioning a more organic sound of the album. If you look back to the older albums, when Mikkey [Dee] played [drums for the band], for example, it's, like, a little bit up and down in tempo, and that makes it dynamic and also organic. So that's one thing that I would like to hear on the next album, for sure. But building up a dynamic, kind of organic feel, the drummer is a really important thing here, of course. And I know that Matt Thompson [current KING DIAMOND drummer] is the right guy to do this, for sure."