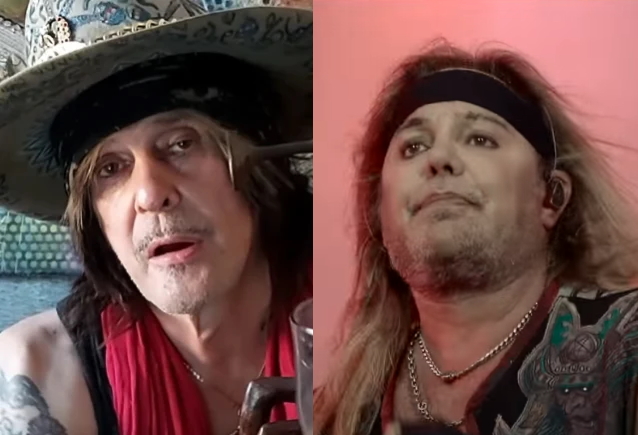 Razzle was killed and two other people were seriously injured when CRÜE singer Vince Neil, whose blood alcohol level was 0.17, which was over the legal limit, smashed his car into another vehicle in Redondo Beach, California in December 1984. Andy told Artists On Record Starring ADIKA Live! that he "never even got as much as an apology from that motherfucker. You know who I'm talking about," he said. "I'm not gonna give any names. Why would I give him fame? Fuck him!

"Every time I see him, he runs away," he continued. "Because he knows what I'd do. But that's our business."

Referencing the fact that Neil and GUNS N' ROSES singer Axl Rose publicly traded insults in 1989 after Vince reportedly accused then-GN'R guitarist Izzy Stradlin of assaulting his wife, Andy said that he would never do anything "like Axl did" with the epic GUNS N' ROSES diss track "Get In The Ring". "No. I'm a freakfire," he said. "I'm from the inner city. [Vince is] from fucking suburban California. You can never compare us, what we know. You read me, bro."

Andy also brought up one of Sixx's stories — of supposedly getting pummeled with a baseball bat on the floor of a dealer's flat after another overdose.

"I saved the bloke's life," McCoy said. "He tells stories that I beat him up with a baseball bat. I used to play baseball. I know how to use the fucking bat. You think that he'd be alive? Hell no. Hell no. But he's after the money. I'm after the art. We are very different. He's a little farm boy from somewhere in Seattle. Shit bumfuck. I'm from the inner city. It's a big difference."

When "Waste Some Time With Jason Green" video podcast host Jason Green noted that he likes the fact that Andy is "so open" about his feelings about the CRÜE, McCoy said: "I speak the truth, mate. I don't lie, like Nikki Sixx, through my fucking teeth."

McCoy was then asked about CRÜE's decision to title their box set "Music To Crash Your Car To", a move that HANOI ROCKS frontman Michael Monroe had previously called "beyond disrespectful". "I thought, and Michael Monroe thought, [that] was the tackiest title, thinking about what had happened… That was in real tacky, bad taste," Andy said. "If you're European like me, it's something you don't do. You respect other people. You just don't wanna make a buck for yourself. You respect other people."

Speaking about the two people who sustained lifelong injuries in Neil's car crash, Andy said: "People forget about those two. I remember. I never forget. People tend to forget about them. And that was horrible. It was just plainly wrong. Fifty yards to the liquor store. I thought they'd walk. But no, this motherfucker — I don't care to mention his name; you know who he is — had to show off his second-hand fucking ugly Pantera, which ain't even a nice car to me."

When Green mentioned that the circumstances surrounding incident were exaggerated in both the "The Dirt" autobiography and biopic, Andy said: "Like the party in that movie, the MÖTLEY CRÜE movie, in some mansion. You know what really happened? We were in a two-bedroom apartment. It was five people there. When I saw that movie, or clips of it, I was, like, 'I don't wanna see the whole movie. This is bullshit again. Hollywood bullshit.' [HANOI ROCKS bassist] Sami [Yaffa] was passed out on the sofa, and Vince's pregnant wife, who was on her seventh or eighth month. That's who was there, [along with me and MÖTLEY CRÜE drummer Tommy Lee]. So the movie is just pure lies and bollocks again. And I can't go for that kind of crap. I want the reality out."

When Green mentioned that it is obvious how much of an influence HANOI ROCKS had been on MÖTLEY CRÜE in the early years, Andy said: "You can bloody see, can't you?"

Sixx previously addressed McCoy's criticisms of "The Dirt" in a 2005 interview with Wisconsin-Music.com. Asked about Andy's claim that certain things that are described in "The Dirt" are "pure lies", Sixx laughed and said: "You know what I love about that? You've got a has-been that never was just fuckin' grabbing at straws to get attention. I mean, c'mon, man. And nothing he says makes any fucking sense. You ever read the interview where he said that his band sold more records than our band? I was like, 'Dude, are you crazy!' [mimics McCoy] 'We sold fifty million records and they sold forty, we were a bigger band than them.' And I'm like, 'Dude, why do you care about my ass so bad? You won't stop talking about it.' He's got a fuckin' crush on me or something."

When the interviewer noted that HANOI's association with MÖTLEY CRÜE came about primarily because of the car accident that killed Razzle, Nikki said: "Sure. It's a very sad thing to happen, but dude, stop already trying to get attention for yourself. He's like the drunk chick at a party that won't stop splashing everybody. But she has bad tits. Stop! [Laughs] No one's gonna fuck ya. No matter — Andy, no matter how much you talk about MÖTLEY CRÜE, your band still isn't gonna make it. Figure it out. I mean, go talk about Keith Richards; maybe that will give you another fuckin' one album sale. [Laughs]"

In a 2005 interview with Metal Express, Andy called the description of the events surrounding the tragic car accident caused by Neil in CRÜE's autobiography "bullshit" and "pure lies." He explained: "I was there. What happened was Razzle disappeared, and so did Vince. The rest of us were chilling out, man. And he had a wife who was seven months pregnant. After an hour or so, she started getting worried. So me and T-Bone, Tommy Lee, took his car and we went looking for him. We drove past this accident. So I was like, 'What color was the car he was driving around?' 'Hey, man, we just passed the fucking scene of an accident with a bright red sports car all smashed up.' I saw Razzle's hat on the street, I went up, 'What the fuck's happened?' They said, 'You have to go to this and this hospital.' In the hospital, I walk in with Tommy, and I was asking about Razzle, and this doctor walks up, 'Anybody here know this guy called Razzle?' I said, 'Yeah, I do, his family.' 'Sorry, your friend has passed away.' I thought he might have a broken leg or something. I had to call the band, and you don't tell this kind of news over the telephone. I asked them to come to the hospital. And it was a pretty sad scene altogether."

In the same interview, McCoy was asked if he had spoken to any of the members of MÖTLEY CRÜE since publicly voicing his displeasure over "Music To Crash Your Car To". "The only one I talk to nowadays is Tommy Lee," Andy replied. "I don't know… Nikki Sixx has got something against me. Maybe he doesn't like that I tell the truth about his fucking heroin overdose. He was never beat up with no fucking baseball bats. The only place he got beat was on his heart to keep it going and with my hands, and giving him a breath of life. And he's a lard-ass anyway, so it wasn't easy carrying him around and trying to get him to wake up — fucking dragging him to the shower and shit. And then having to read how he was O.D.ed and beaten up with baseball bats and all this crap. C'mon, wake up. I warned him that the stuff was strong. But he wanted to be a tough boy, but with that kind of shit, you don't wanna be a tough boy, 'cause it might be a very thin line between life and death you're playing with. Is it worth it? No."

For his role in the Redondo Beach crash, Vince was charged with vehicular manslaughter and driving under the influence of alcohol. His blood alcohol level was 0.17, which was over the legal limit. Neil served half of a 30-day jail sentence, received five years probation and had to pay $2.6 million in restitution, as well as perform 200 hours of community service.

Two years ago, Monroe told "The Classic Metal Show" that he was "not interested at all" in seeing "The Dirt". Monroe went on to say that the car accident "certainly destroyed a lot of people's lives. I've never blamed anybody — you can't blame anybody for an accident — but a lot of people's lives were shattered, "he said. "As well as the two teenagers who got paralyzed in the accident; I've heard that there was no mention of them either [in the film].

"It's a depressing subject and it's always like opening a can of worms," Michael continued. "And I just don't wanna get into all that. It's just useless."

Back in 2004, Monroe slammed MÖTLEY CRÜE for the band's decision to title a box set "Music To Crash Your Car To", calling the move beyond disrespectful and referring to Sixx as "shallow," "ignorant" and "stupid". "The 'Mostly Crude' gotta be as dumb as they are to have done that," he told Metal Sludge. "I'm not only talking about Razzle, but also for the other families involved in the accident... As we've previously stated: The most tasteless and murderous gimmick to cash in on the past we've ever heard of. There's nothing 'cool' or 'funny' about death or winding up a paraplegic for life. How low can you go? I'd say this gave bad taste a bad name."

Three years later, Monroe publicly apologized to Sixx, saying that his "unflattering comments" about the bassist were "really childish and stupid." He explained: "I just took it a bit personally when they called their album at the time 'Music to Crash Your Car To'. I thought it was inappropriate since it came across as if they were making fun of the accident, which I'm sure was not their intention."

In 2011, Monroe gave Sleaze Roxx his take on what happened that night: "There was an accident, and unfortunately our drummer was killed. As far as Vince Neil, I have nothing to say. It was an accident. What happened happened, and it can't be changed. Everybody suffered from the whole thing."

Even though HANOI ROCKS was formed in Finland, their trashy, hedonistic, decadent hard rock/pop-metal boogie influenced many Los Angeles acts, including CRÜE and GUNS N' ROSES.

HANOI ROCKS originally broke on to the hard rock scene in the first half of the 1980s, becoming one of the first Finnish bands to make an international impact. HANOI ROCKS's career was subsequently derailed after the death of Razzle. Internal tensions and the commercial disappointment that was 1985's "Rock & Roll Divorce" led to Monroe leaving the band that year, thus putting an early end to HANOI ROCKS.