A new trailer for Rock House instructor and virtuoso Kiko Loureiro's (ANGRA) two-DVD set, "Creative Fusion: Beyond Power Chords & Pentatonics", can be viewed below. The set contains over two hours of lessons in which he shows rock players how to incorporate fusion elements into their playing and helps them expand their guitar vocabury by understanding new concepts.

Kiko Loureiro's roots in Brazilian, Latin, fusion, jazz, metal and classical music influence his masterful compositions and style. In this program, Kiko shows you a method for using arpeggios to craft amazing leads and melodies. He starts with major and minor arpeggios and triad voicings and builds them into progressions. He then expands on this concept with major arpeggio extensions adding the 7th and 9th and shows how to complete the mission by delivering full dominant and diminished arpeggios in single and cross string technique. Kiko explains and demonstrates how these all relate as tools for creating your own unique musical style. Learn modal arpeggios and how to apply them over full band backing tracks so you can start creating your own masterpieces!

Kiko Loureiro has risen to international acclaim and stardom by being the lead guitarist of the world-renowned Brazilian rock group ANGRA. Currently, he has two solo projects: "No Gravity" and his latest jazz guitar release "Universo Inverso".

Kiko Loureiro was voted the #1 progressive/metal player in the world by readers' polls in two of Japan's most popular guitar magazines: Young Guitar and Burrn!!!. He beat out guitar gods Steve Vai, Eddie Van Halen, Joe Satriani, Yngwie Malmsteen, Paul Gilbert, John Petrucci and a host of others to receive this honor. 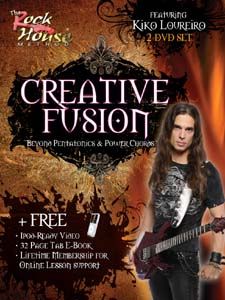