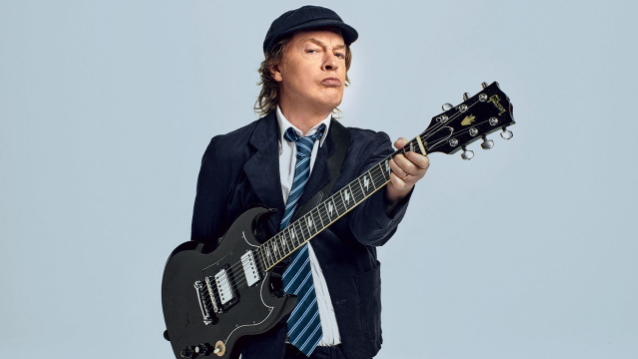 ANGUS YOUNG Never Had Doubts About AC/DC's Ability To Continue

Asked if he ever thought AC/DC had come to the end, especially when it looked like Johnson, Williams and Rudd weren't returning to the group, Angus responded (as transcribed by BLABBERMOUTH.NET): "No, I never did, because I always knew there would be something to do with AC/DC. For myself, I've been there from the beginning, and I always knew there would be something, whether it'd be — even for your record deal, putting together tracks or other material that you might wanna put out, or live stuff, or even some footage or film[ed performances] and stuff. So I always knew there would be something to do with AC/DC. But as a band, playing live and studio, I can say that was a bit unknown, but I never really thought that [not being able to tour or record new music as AC/DC] would be an ending. 'Cause I always thought, even if this stopped, somebody's still gotta be able to carry the pieces. They're gonna look to someone to pick up the pieces of how it's gonna be looked after."

Angus also talked about the decision for AC/DC to continue touring and recording after the passing of his brother, the band's founding rhythm guitarist Malcolm Young. Malcolm died in 2017 after dementia had forced him to retire from AC/DC. He was also suffering from other health problems.

"That was [Malcolm's] whole way of doing things. He always said you plow along, you keep going," Angus said. "When he was first getting sick, he had a lot of help [on AC/DC's] tour [in support of the] 'Black Ice' [album] — he was on medicines, helping him get through that. But he was still coherent and everything. He was even putting down [new song] ideas then also. Whenever I was with him, he would be always saying, 'We keep going as long as I can do it.' I always took that from him. And even when he was in hospital and stuff with operations, he was the same — he would say, 'I wanna be here. I wanna be with you.' As he said, 'Keep your head down and keep [playing].'"

The legendary hard rockers postponed the last ten dates of their North American tour in 2016 after doctors told Johnson he faced a total loss of hearing if he did not stop touring immediately. He was eventually replaced on the road by GUNS N' ROSES vocalist Axl Rose.

Johnson eventually found a specialist willing to try an experimental treatment on him and he spent three years figuring out a solution.

Rudd, who has appeared on most of AC/DC's studio LPs, toured in support of his 2014 solo debut, "Head Job". It was the release of that album that led indirectly to Rudd's arrest, with the drummer allegedly so angry at a personal assistant over the way the record was promoted that he threatened to have the man and his daughter killed.

Williams recently revealed that a "terrible" bout with vertigo contributed to his 2016 retirement. He also admitted the return of both Johnson and Rudd convinced him to return to the group.

"Power Up" was recorded over a six-week period in August and September 2018 at Warehouse Studios in Vancouver with producer Brendan O'Brien, who also worked on "Black Ice" and "Rock Or Bust".