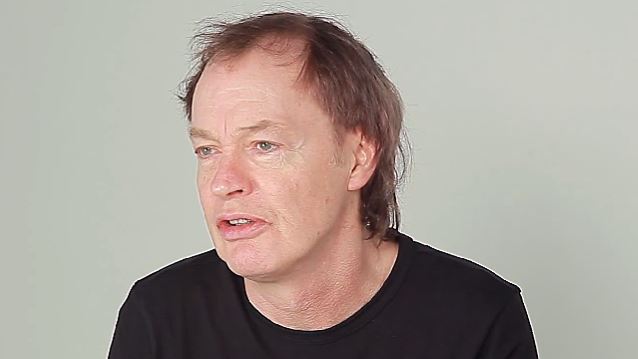 ANGUS YOUNG On PHIL RUDD's Status With AC/DC: 'It's Something We've Gotta Get Resolved'

AC/DC guitarist Angus Young addressed the legal problems of drummer Phil Rudd in a new interview with Australia's long-running rock station Triple M, saying that the drummer is "in a strange place and a strange situation." Rudd was arrested on November 6 and charged with attempting to arrange a murder, threatening to kill and possession of meth and marijuana. Although the first charge was dropped, he still faces seven years behind bars for the others.

He continued: "We had a few problems [with Phil] ourselves before he got into this situation, because there was a lot of strange behavior going on, which I guess you could put it down to him not showing up for a lot of what we were doing.

"When you have to get to a stage when you've gotta convince someone to be there, it wears thin after a while. But it's something we got to resolve. It is a bit of a question mark."

Young recently told Rolling Stone magazine about Rudd's current legal troubles: "Phil created his own situation. It's a hard thing to say about the guy. He's a great drummer, and he's done a lot of stuff for us. But he seems to have let himself go. He's not the Phil we've known from the past."

The guitarist did not want to delve into whether drugs were involved in Rudd's seeming decline, adding, "I don't know the exact situation… I can only say, from our perspective, that the guy needs to sort himself out."

AC/DC issued a statement on Rudd's arrest, saying that this absence will not affect the December 2 release of the band's new album, "Rock Or Bust", and the group's upcoming tour.

Drummer Bob Richards sat behind the kit for the filming of the videos for singles "Play Ball" and the title track, but it is not known whether he will join the band on tour if Rudd cannot.