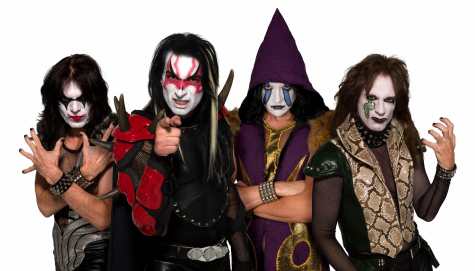 ANIMETAL USA — the American counterpart to ANIMETAL, the Japanese heavy metal band which specialized in metal covers of popular Japanese anime/tokusatsu theme songs — will have its self-titled debut album released in the U.S. on June 26 via Century Media Records. A European release date will follow shortly thereafter.

ANIMETAL USA will make its U.S. live debut at the Anime Expo on June 29 at the Los Angeles Convention Center between 5:30 p.m. and 6:30 p.m. at the Main Events/Hall G.

Commented Impellitteri: "We will be playing a lot of our metal/anime songs like 'Mazinger Medley', 'Gachaman', 'Ai Wo Torimodose' and 'Thesis Of A Cruel Angel', as well as the opening track for the next record titled 'Touch', which is pure addrenalin from start to finish."

And before all this Stateside action for the group, ANIMETAL USA will launch a co-headlining Japanese tour with JAM PROJECT — dubbed the "Japan USA Anison Summit" tour — including the following dates:

Added Impellitteri: "It is crazy to think we can play arena shows and sell this many records when we are doing something as weird and unique as mixing metal with anime. Very strange to me, but musically this music is really challenging and exciting to perform, especially the first song on our upcoming record titled 'Touch'. The song has about 40% of an original song we wrote titled 'The Haunting'. It sounds a bit like an excited up-tempo BLACK SABBATH! The 'Touch' guitar solo is insane to play! It reminds me of the Randy Rhoads classic solo 'Mr. Crowley', which burns in the intro and then becomes very orchestrated on the second half. I definitely was listening to Randy a lot when I recorded this record... ha ha! Mike, Rudy, and Jon are also killing it on this record. Amazing rhythm section. Tight and powerful! And, as always, Mike has got walls of awesome vocals all over this record with great melody and range. The dude belongs with the THREE TENORS.

He added, "The next record which will be released towards early summer has a bit more of a commercial sound to it, with the exception of few crazy, balls-out-metal songs like 'Touch'!"

The drums on ANIMETAL USA's debut album were laid down by JUDAS PRIEST's Scott Travis. He has since been forced to leave the group due to his touring commitments with PRIEST.