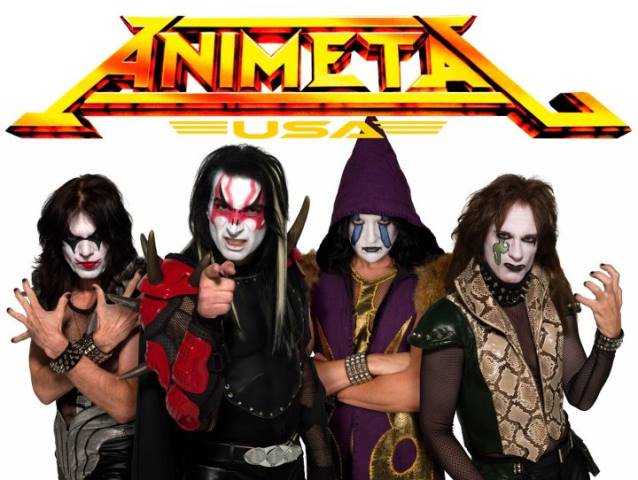 ANIMETAL USA, the American counterpart to ANIMETAL, the Japanese heavy metal band which specialized in metal covers of popular Japanese anime/tokusatsu theme songs, has inked a deal with Warner Bros. for the release of the band's third album, tentatively due in late 2014.

The drums on ANIMETAL USA's debut album were laid down by JUDAS PRIEST's Scott Travis. He has since been forced to leave the group due to his touring commitments with PRIEST.

In a post on his official web site, Impellitteri writes: "For those of you that are unfamiliar with ANIMETAL, please use caution when judging... ha ha!

"Please note, ANIMETAL is a project that features me on guitar, Rudy Sarzo on bass, Mike Vescera on vocals, and Jon Dette on drums (the great Scott Travis from JUDAS PRIEST recorded the drums on our first ANIMETAL record).

"For those of you that are unfamiliar with ANIMETAL, here is a quick overview:

"ANIMETAL blends famous anime themes with both original and cover versions of well-known heavy metal songs. This project is a lot of fun and hopefully will continue to bring metal influences to a new generation of anime fans and kids around the world.

"Here is a link [see below] I found on youtube that has one of our ANIMETAL songs where we blend the riff of BLACK SABBATH's 'The Mob Rules' with the famous animation song titled 'Cats Eye'.

"Of course, most of the music features original metal riffs mixed with anime story line lyrics, and I get to totally shred during the guitar solo which is always a lot of fun for us guitar players!"

ANIMETAL USA made its U.S. live debut on June 29, 2012 at the Anime Expo at the Los Angeles Convention Center at the Main Events/Hall G.

ANIMETAL USA released its self-titled debut album in the U.S. on June 26, 2012 via Century Media Records.