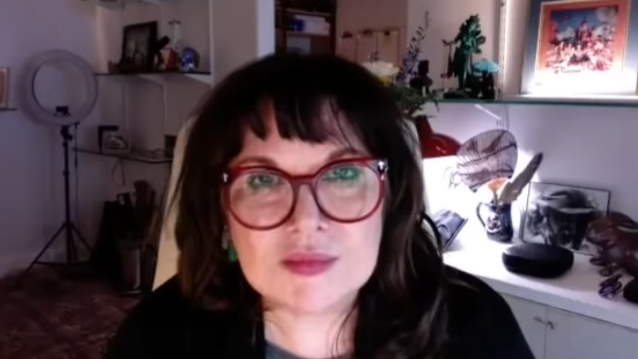 During a brand new chat with "Interviewing The Legends With Ray Shasho", HEART singer Ann Wilson reflected on the band's 2013 induction into the Rock And Roll Hall Of Fame which saw her and her sister Nancy reunited with the four musicians who helped HEART achieve its initial success in the mid-1970s — guitarist Roger Fisher, bassist Steve Fossen, drummer Michael DeRosier and longtime guitarist-keyboardist Howard Leese.

"It was a really interesting experience getting together with the original lineup of the HEART guys back on the Rock And Roll Hall Of Fame induction time — just because we've been through so many different incarnations in this band, and each one of them has been great in its own right," Ann said. "And as time has gone on, the sound of the band has changed as it goes through the different eras. And so on the day when we got together with the original lineup guys to get ready for the two songs at the Rock Hall, we rehearsed off site, and we went through 'Crazy On You' and 'Barracuda' and stuff like that, and it sounded so different from what I'm used to now. Because back then we didn't have a swing factor; it was more like up and down, left and right. It wasn't necessarily butt-shaking music like it is now."

HEART performed three songs at its Rock Hall induction. The first was a rendition of "Crazy On You", featuring the Wilson sisters along with DeRossier, Fisher, Fossen and Howard Leese; the Wilsons then played an acoustic version of "Dreamboat Annie", followed by "Barracuda", with the sisters and the then-lineup of HEART joined by PEARL JAM's Mike McCready, SOUNDGARDEN's Chris Cornell and ALICE IN CHAINS' Jerry Cantrell. HEART was inducted by Cornell.

The Wilson sisters' reunion with HEART's original lineup at the Rock Hall ceremony marked the first time the group played together in 34 years.

When Ann and Nancy formed HEART, the idea of two women leading a rock band was still groundbreaking. From the moment 1976's "Dreamboat Annie" was released, they became stars. With hits like "Magic Man", "Crazy On You", "Barracuda", "Alone", "What About Love" and "These Dreams", the band became one of the biggest hit-makers in the Seventies and Eighties, selling more than 35 million records. In 2012, their memoir "Kicking & Dreaming: A Story Of Heart, Soul And Rock & Roll" became a New York Times bestseller.

Fisher joined Ann Wilson on stage last October during her solo concert at the Neptune Theater in Seattle, Washington to perform the HEART classic "Mistral Wind".

Roger's performance with HEART at the Rock Hall induction marked his first appearance with the band since he left after his personal relationship with Nancy Wilson ended in 1979.