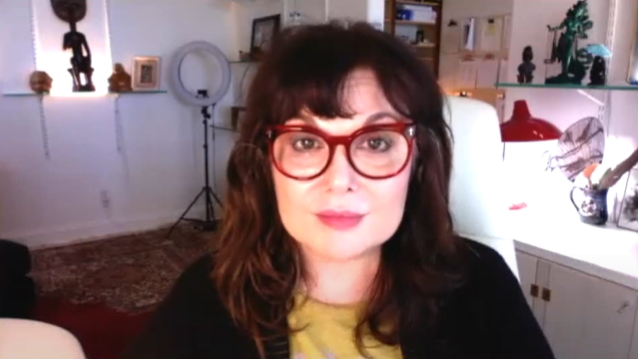 ANN WILSON Says HEART Has 'Big Plans' For 50th Anniversary: 'It's Gonna Be A Great Event'

In a new interview with HeadBangers LifeStyle, HEART singer Ann Wilson was asked if there are any plans for the band to celebrate its 50th anniversary next year. She responded (as transcribed by BLABBERMOUTH.NET): "Well, it's a little bit too early for me to be talking about that, but we do have big plans. And it's gonna be a great event. That's really all I can say at this point because it's such early days. And we will be dropping little information as the plans get locked. I don't wanna just start talking about it now until things are actual reality."

Ann's latest comments come just days after she denied rumors of a rift with her sister and HEART bandmate Nancy. In an interview in the 300th issue of Classic Rock, Ann said that she is "not" feuding with her younger sister. "It's a myth," she insisted. "Nancy and I are okay with each other. We just have different ideas for what HEART should be, and we haven’t figured out a compromise yet.

"Fifty years on, I still want it to break barriers and rules, and she's more satisfied to ride the L.A. imaging thing and just do legacy stuff," Ann explained. "So that's a real split between us. Things like this will happen, though, but then they'll get better, and we'll love each other more."

Relations between the two sisters were considered to be at an all-time low after a much-publicized incident when Ann's husband was arrested during a HEART tour in 2016. But in a recent interview with Rock Candy magazine to coincide with the release of her new solo album, "Fierce Bliss", Ann said: "Things happen in families. And that was a really good example of something that happened within a family, and we worked it out. But the part that made it hard was that it happened in the public eye. If it had happened privately, we'd have got the family in a room and sat down and worked it out between us. Instead, the police were called, and this myth was born that Nancy and I were feuding, and we were at each other's throats all the time. And it's really not like that at all."

"It depends on the songs," she said in her Rock Candy interview. "The songs lead everything. And I'm writing songs again now. I don't know if they'll be for my solo thing or for HEART. But yes, I would like to make another HEART album."

Two months ago, Nancy spoke to Joe Rock of Long Island, New York's 102.3 WBAB radio station about why HEART has been inactive for most of the past three years.

"HEART had a big offer on the table last year for a bigger tour, but Ann wasn't interested in going out with my lineup of guys that we were out with before," she said. "She has a new lineup of guys that she wanted me to join up with. And I sort of [thought] I don't really know them and don't have loyalty yet for anybody like that."

HEART toured North America in the summer of 2019 after the aforementioned nasty split that kept the Wilson sisters estranged for three years.

Nancy's debut solo album, "You And Me", was released last May via Carry On Music. The LP was recorded primarily in her California home studio, working with bandmembers and special guests remotely.

"Fierce Bliss" will arrive on April 29 via Silver Lining Music.