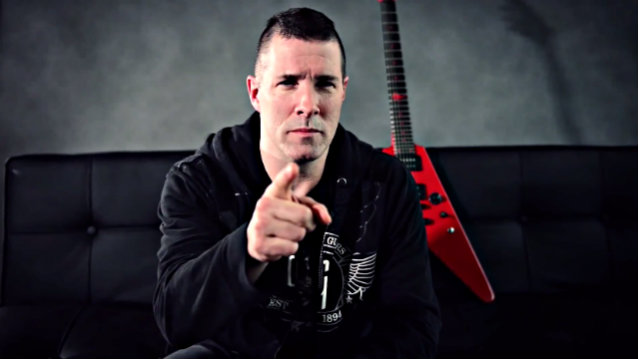 ANNIHILATOR's JEFF WATERS: 'I Don't Progress As A Songwriter That Much'

Greg Prato of Songfacts recently conducted an interview with guitarist Jeff Waters of Canadian metallers ANNIHILATOR. An excerpt from the chat follows below.

Jeff Waters: Hmm. That's a tough one. I've got to be honest: After being the main songwriter since the first record we did in '89 — the main guy doing 90 to 100 percent of the writing on the records — it's very tough to come up with stuff sometimes. You get writer's block or you just simply come up with stuff that you're kind of repeating from the past. "Feast" is our 14th record, so I've got to work very hard at that. But like a lot of writers, I try to change certain things up to get inspired. A lot of times writers will write after they get off the road and they're all psyched about playing with other bands and hearing riffs from other bands live. Just seeing concerts or whatever things in your life you experience that might inspire you. But I think the actual songwriting process is kind of hard to deviate from: You're kind of born with, "Okay, this is how I do it," and it's tough to get outside of that. There are some writers that can do that, which is just genius talent. But I don't continually listen to music — especially new music — and I don't practice guitar all the time like I did when I was younger, just because there are so many other things I have to do involved in the group and life in general. So I don't progress, really, as a guitar player that much and I don't progress as a songwriter that much. I'm simply, in a way, rehashing everything that I've soaked up in the first 10 years of my metal life that just keeps coming out in the songs. I'm sure if I went out and started listening to a lot of other new bands it would influence what I'm doing, but it's not really what I want to do or what I'd like to do. I just like what I'm doing. The key for me is I've got to really work hard to review what I've written right after I write something and take at least a minute away from it or a day or whatever and say, "Holy crap, is this a SLAYER riff, for crying out loud?" You know what I mean? Like, sometimes you get too close to your favorite bands. But as long as you can be a bit objective and can squeak by and later on you look back at records and go, "Darn, that song could have been better," or "This really sounded like an IRON MAIDEN harmony style." But that's like a tribute. It's where I got my stuff from the in the first place, as a fan and guitar player. "Feast" is really no different. I just got lucky in the sense that I think somehow the songs on that one, at least the first half of the record, the songs sort of stepped up a level from the previous couple. Then again, when I say that a lot of people will argue and say, "No, no. Three records ago was your best one lately." And some will say the last one. I'm lucky I'm in a band that doesn't have the same style every single record and there's little different styles of music that slip in there. Some people like the changes, and some people don't. But I think "Feast" just got lucky because our singer Dave Padden and I were in a good frame of mind and something was different. I have no idea what it was. I think everybody agrees — at least overseas — it's a better album that we've been putting out lately. Hey, imagine if there was a drug or a pill or something that could make a perfect song or the perfect record every time. AC/DC would have 15 "Back In Black"s by now.

Songfacts: Since you write the majority of the songs yourself, you probably make more money as far as publishing and royalties, if you're the only songwriter. Does that come into play at all?

Jeff: Yeah. Absolutely. That was actually my reasoning for it. Not in the beginning. In the very beginning of ANNIHILATOR, for the first bunch of albums, it was just, steer the ship. I had an issue with booze, but I was able to keep on track a lot more than the other guys. There was drugs and booze and girlfriends and partying in the way of a lot of what was going on for the first two albums. I had to take the reins and say, "Okay, if the bass player can't be here, I'll play the bass. If the singer won't write the lyrics, I'll do it." So that was the way it lasted for quite a few years. And then it sunk into the mid-'90s when the metal scene, so to speak, died. I mean, I know it didn't die, but it completely went out in North America. Clubs weren't booking metal bands and radio wasn't playing. "Headbangers Ball" and "Power Hour" up here in Canada were getting taken off the air. So it was really tough for any traditional heavy metal bands to continue, and most of us lost deals. But in that time I was able to still have Japan and Europe enough that I could continue. But I had to build my own recording studio — which is fantastic — and learn a lot about the recording process and do a lot of it myself. The songwriting at that point became a survival thing, too. At that point I was singing for about three albums, so it made sense that I would write everything myself. It was kind of my thing. Economically, that really did help. The publishing money and record money, and not having to put money into a big studio and a name producer/engineer and get it mastered. It all sort of added. So the songwriting thing helped, too. That wasn't my intention, but it sure got me through the '90s and back into the 2007 era, when we started going back up again. But yeah, songwriting-wise, you'd have to be one hell of a shitty songwriter to write with me and not come up with something good. Because musicians can push other musicians and get the best out of them no matter what level they're at. A good example: look at all the pop TV shows around the world and all these "American Idol"-type things. Most of us know that most of those people don't write anything, but they're guided by songwriters and they're guided by producers to come up with something that sometimes is really amazing.