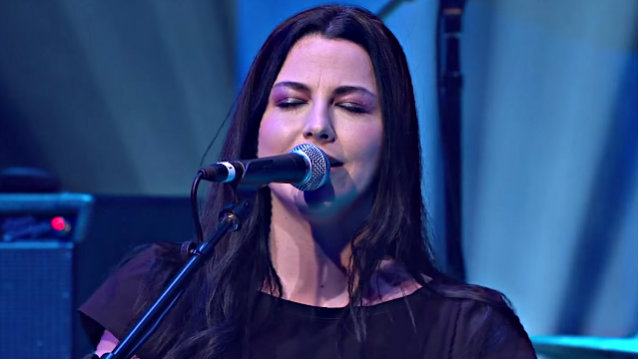 AMY LEE: 'I Never Said EVANESCENCE Was Over'

EVANESCENCE singer Amy Lee says that the group is not over despite the fact that there are no plans for the band to do anything in the coming months.

Lee recently told Rolling Stone about EVANESCENCE's current status: "The situation is we're not doing it now. I don't like to make predictions about the future, because I'm honestly open-minded, and I would never want to say I'm done with any of it, because it's a huge part of me. I've loved my time with EVANESCENCE, I wouldn't want to just throw it away, but, for the foreseeable future, I don't have any plans to do anything with the band."

In a brand new statement posted on her Facebook page, Amy elaborated on her previous comments, writing: "Feeling the need to clarify this — I never said EV was over. I wouldn't limit myself that way. I said I wasn't doing it now and have a completely open mind for the future.

"An open mind is a beautiful thing — I had one when I started the band.

"I'm never going to stop searching for things that inspire me, that make me excited about life, art and music. That's what makes it GOOD!

"I'm not going to let anything or anyone hold me back and make me run in place, especially not an image of myself. Listen to my lyrics and you'll hear that message being called out from the beginning.

"We've got to look forward, keep moving, keep searching, keep growing. You never know what you may be capable of unless you try.

"EVANESCENCE is a part of me — it just isn't a complete picture of everything I'm capable of — not even close.

"To be honest, the most inspired and fulfilling thing I've ever been a part of creating has nothing to do with music — I'm holding him in my arms.

"Don't be afraid to take chances. You may end up with something way better than what you were ready to settle for."

Lee, who became a mother for the first time in July, said that she keeps in touch with the members of EVANESCENCE, but added that "the days of living on the road and an album cycle be this giant daunting thing of working in the studio for six months then going on the road for a year or two, they're behind me."

On August 25, Lee released a new album called "Amy Lee With Dave Eggar: Aftermath", consisting of music she wrote with Dave Eggar for an independent film called "War Story". The movie premiered earlier this year at the Sundance Film Festival.

Journalist Gary Graff had a chance to ask Lee if anything was up with EVANESCENCE, and she told him (hear audio below): "Nothing right now. I'm definitely enjoying this new space, and I guess that's nothing really new.

"Every time we've put out a record there's been a few years in between where I sort of needed to find myself again, but I really like to keep that open mind and having nothing in place in my head about what's gonna happen a year or two down the line. I've got to wait for inspiration to tell me what to do next...

"The truth is I love making music, and I'm going to make music for the rest of my life. Whether that means it's called EVANESCENCE or not, I don't know, but I wouldn't worry about it if I were a fan. But I'm a different kind of a fan."

Lee added that, "I'm really proud of what EVANESCENCE is, but at the same time I feel like I have a lot more that I want to do with my life and a lot more that I want to express, and there's only so much that people are really going to, gosh, allow EVANESCENCE to be. It's already happened; people hear the word EVANESCENCE and they associate it with 'My Immortal'. We were working on 'My Immortal' when I was, like, 15 years old, so now that I'm 32 it's kind of like you get into a headspace where you're like, 'I need a new page to be able to be myself now,' so in a lot of ways I feel that way."