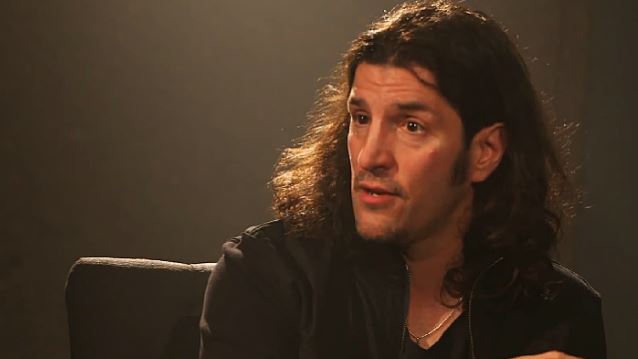 During a recent interview with SiriusXM's Jose Mangin on Liquid Metal's "666-LIVE" call-in show, ANTHRAX bassist Frank Bello was asked for his reaction to the news that drummer Shawn Drover and guitarist Chris Broderick had left MEGADETH.

"Well, you know what, dude?!" he said. "I don't know the inner workings of the band. I'm sad to see it; they're all good friends. [Dave] Mustaine's [MEGADETH mainman] a friend of mine and [David] Ellefson [MEGADETH bassist, with whom Bello has a side project, ALTITUDES & ATTITUDE], obviously, and Shawn and Chris."

He continued: "I don't go into other people's backyards, you know what I mean?! Whatever they had go on, I respect it. I'm sorry about [it], but, you know, Chris and Shawn are great musicians. I think they'll be fine wherever they end up. So it's just something else that happens in a long career like this, whatever the reason may be."

Bello added: "I know that's the politically 'right' answer to give, but I don't know. I don't know the answer to that, I just hope everyone's happy where they are.

"I know how hard it is when you leave a band after so many years; it's tough…

"I don't know the future, but I'm sure both sides will be fine."

Only hours after Drover announced his exit from MEGADETH on November 25 to "to pursue [his] own musical interests," Broderick revealed he also quit the legendary metal band, saying that he was leaving the group "due to artistic and musical differences."