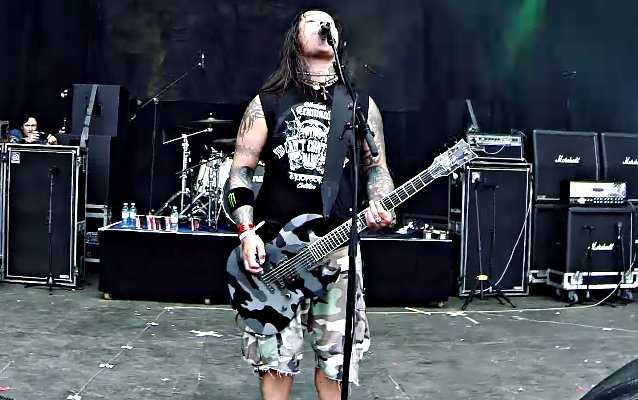 "Whisper", the new video from Hungarian extreme metallers EKTOMORF, can be seen below. The track is taken from the band's latest album, "Retribution", which was released on January 31 via AFM Records. The follow-up to 2012's "Black Flag" is described in a press release as a "first-class fist-in-your-face album, displaying heavy grooves and sheer power in the best of ways. Refining and bringing things to perfection was the goal, and this has been achieved impressively."

In an interview with Metalholic.com, EKTOMORF guitarist/vocalist Zoltán Farkas stated about the band's constant comparisons to SOULFLY: "Everybody has their own influence. SOULFLY had their own influence, METALLICA has their own influence, SLAYER has their own influence. Every band has some influence and mine was SOULFLY [and] METALLICA, but then, of course, we got our own taste and that's the true form, and we have really good fans all over the world, and because if we were just a simple copy, all this would never happen. If were a cover band, like some say, it would never happen. It's easy to say that, it's so easy to say words and thoughts. I just call it ignorance and envy, but I learnt to handle it through the years, and for me, the most important is those people who love my music, who appreciate my music, because they are the most important, and for those who don't, it's not important, because anyway, they don't appreciate the music, so they don't count in my life, not even one minute. So, you know, we have our own faith and if someone says we sound like SOULFLY, then check out the latest stuff from SOULFLY and then check out 'Retribution', and if someone says it sounds the same. then they have some problem with their ears."

He continued: "For me, [SOULFLY mainman and ex-SEPULTURA frontman] Max [Cavalera] is a respectable legend, but for very long time I didn’t listen to SOULFLY, for a really, really long time, because, to me, what it does now is something which I don't like; I don't like it, man. It's more like death metal, and I like some death metal, but the SOULFLY I used to like does not exist anymore, neither SEPULTURA. [SEPULTURA] were something which I fell in love with and the anger, but for what they do now, I still have my respect for the band and for the legend and the name, but I gotta say that is nothing to compare with what they were."