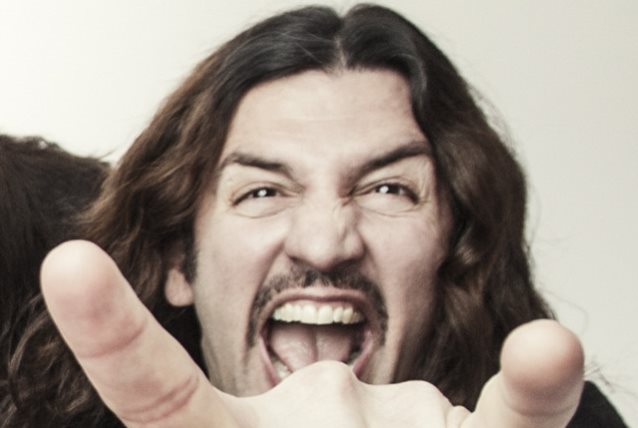 ANTHRAX Bassist On The Political Situation In U.S.: 'It's A Zoo What's Going On Right Now'

EMP Live conducted an interview with ANTHRAX bassist Frank Bello at this year's Resurrection Fest, which was held July 5-8 at Campo de fútbol Celeiro, Viveiro, Spain. You can watch the full chat below. A few excerpts follow (transcribed by BLABBERMOUTH.NET).

On the lyrical direction of 2016's "For All Kings" album:

Frank: "Scott [Ian, guitar] writes the lyrics, and the band and he usually go over them and we agree with them or not agree with them. For me, they're not negative, they're just what our life is going on around us. This is what life is about right now. It's not the best of times in the world. But what we've always had in our lyrics is what's going on in life, it's a reflection and our take. I think we're all sponges, and it all comes into our brains. As artists, we bring it out. You could look at it the way you want to look at it. I choose to look at it [like] it's a perspective of what's going on. Look at your favorite news station, whatever news you watch, how good is the world going on right now? Look, this is all to maybe learn from what's going on and hopefully have a better day tomorrow. You look at it, digest and say, 'How can we make this better?' If you're hearing negative news, you say, 'How can we make this better? How can I live my life to be better than this?' That's the only way to do it or you'll go crazy. You can't go crazy. That's my take on it."

On the current political state of the United States under President Donald Trump:

Frank: "It's a zoo what's going on. In the world, not just America. It's everywhere. I love America, I was born and raised in America. Look, that's the way politics are. Everybody has trouble with politics. We travel everywhere around the world, we see it everywhere. It's a crazy, crazy time. It's historic, crazy times, but we will, as we always do, we'll get off the floor and brush ourselves off and have another day. Whether it's good or not, I don't know. All I know, is you have to survive. And this is survival. Right now, we're in a survival world. We have to take what we have and live the best way we can. That's the only way to make sense of it without going crazy."

On METALLICA performing with Lady Gaga at this year's Grammy Awards:

Frank: "I thought it was great because we know Gaga. Gaga does love metal. She's awesome. We've met her, she's a really nice person and she's genuinely into it. She wears ANTHRAX shirts. She's always been very supportive of metal, so why would anybody look at it in a negative way if she's supporting our thing? It's great to have an A-list celebrity. She's amazing. Gaga is more talented than most people out there. Lady Gaga is an incredible talent, she really is. When I saw that on the award show, I said 'That's great! Why not?' And just try to see what happens. We would love to work with Gaga. Why not? She's a great musician and she writes great songs. I think she's a genuine talent. Why not? You can't be narrow-minded. My thing is, I don't want to be narrow-minded. Open your horizons to it because you don't know what that is going to make. It could be a great song you might like or somebody out there you never thought you would like. 'Wow, I really like that!' It's something outside of the box. I find that very important to do."

On whether the thrash metal revival that has taken place in recent years has been beneficial to ANTHRAX:

Frank: "We haven't been home. [Laughs] It's nice to be wanted. Every time we get home, we're asked to do another tour, which is great. Look, at the end of the day, we're spreading metal around the world. That's the way I look at it. There's nothing more flattering than to have people come to a show and listen and watch your show and really be supportive. That's why we do it. That's the drug. It's the best drug! I don't do drugs; that's my drug, to step on the stage tonight. That's my drug. I step on the stage, I'm the highest guy in the world, right there, without anything bad, it's just the best high in the world. That's why I did it so many years ago. When I wanted to do it, I'm very fortunate and I know how lucky I am to make a living doing this. So for me to go out there and make anybody, one person forget about their problems for an hour-and-a-half that we play music, then we've done our job. We have this great thing with our fans. It's just a vibe. We come together and it's a mix. We have this great vibe and energy. That energy can't be touched. That's the drug you live for."

ANTHRAX drummer Charlie Benante recently confirmed that the band has commenced the songwriting process for the follow-up to "For All Kings". Also in the works is a twentieth-anniversary expanded reissue of ANTHRAX's "State Of Euphoria" album, which is scheduled for release in 2018.