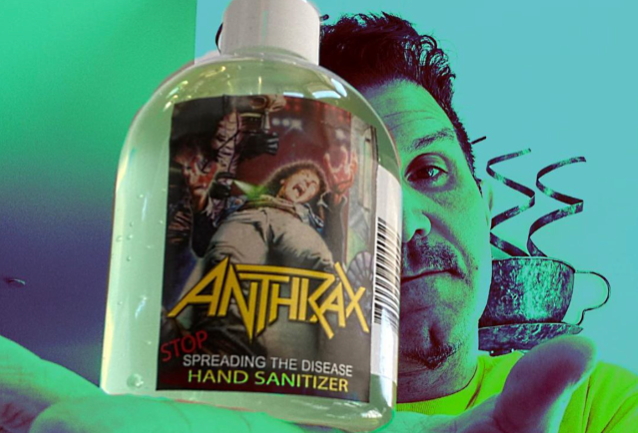 ANTHRAX has created its own hand sanitizer.

The Stop Spreading The Disease hand sanitizer will be made available soon via Global Merchandising Services, which represents the worldwide merchandising rights for the band.

The bottle features a variant of the cover artwork from ANTHRAX's second album, 1985's "Spreading The Disease".

ANTHRAX is named after a bacterial disease primarily found in livestock that the Centers For Disease Control And Prevention (CDC) has recognized as a potential agent of bioterrorism.

In 2001, a week after the September 11 attacks on the World Trade Center, five letters containing powdered anthrax were mailed to media outlets in New York. Three weeks later, another two letters were sent to U.S. senators. The attacks killed five people in total.

Despite the fact that ANTHRAX had been using the name without controversy since 1981, it was being attacked in the media for appearing insensitive. The band issued a press release jokingly suggesting that it would change its name to "BASKET FULL OF PUPPIES."

"Before the tragedy of September 11th the only thing scary about ANTHRAX was our bad hair in the 80's and the 'Fistful Of Metal' album cover," the band said at the time. "Most people associated the name ANTHRAX with the band, not the germ. Now in the wake of those events, our name symbolizes fear, paranoia and death. Suddenly our name is not so cool."

Hoping to help anyone searching the Internet for medical advice about anthrax, ANTHRAX also temporarily changed the band's web site (anthrax.com) to contain information about the spread and treatment of anthrax.