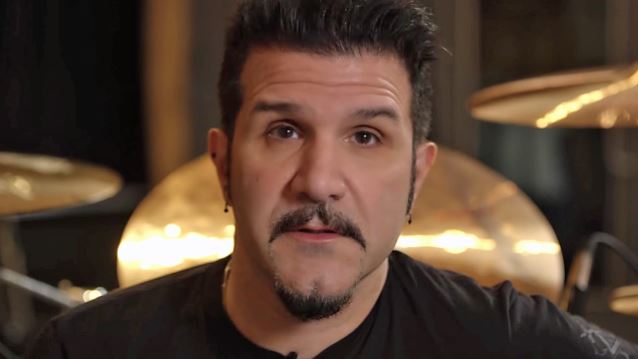 Drummer Charlie Benante is sitting out ANTHRAX's current European tour dates with SLAYER. He is once again temporarily being replaced by Jon Dette, who has previously played with SLAYER, TESTAMENT and ICED EARTH.

"I want to let all of our fans know what the situation is with my being or not being on the road with the band.

"Most of you know I had to have hand surgery a couple of years ago for the carpal tunnel syndrome that I developed. Since then, I've continued to have regular physical therapy and doctor's office visits, and while my hand has gotten a lot better, it just hasn't fully healed.

"My doctor says it could continue to get better, but that's going to take as much time as it takes.

"When we were recording our new album, I realized that after three or four weeks straight in the studio, playing every day, not only would my hand start hurting like hell, but I would lose all feeling in it for a couple of days. And the same with being on the road — I seem to be OK for a couple of weeks, but after that, the carpal tunnel flares up, the pain sets in, my hand goes numb, and I simply cannot play the drums, especially with the intensity that ANTHRAX's music requires.

"I love being on the road, playing our music live for you guys, and I'm very excited about playing our new songs for you in 2016, but, at least at this point, for those four, five, six or seven week tours, I just won't be able to be on all dates.

"ANTHRAX has just started a European tour with SLAYER, and Jon Dette is sitting in for me for the first three weeks or so; I'm planning to join the band on November 21 in the UK and will be on the remainder of the tour.

"If there is a silver lining to this, it's that the time that I'm not on the road with the band, I am able to stay actively involved in the band's artwork (very excited for you all to see the cover art for our new album!),be available to promote our upcoming album, and help put together special ANTHRAX editions like our upcoming 'Spreading The Disease' reissue.

"So, that's the situation. I wanted to make sure that all of you knew exactly what was going on and that I thank you all for the understanding and support. I sincerely look forward to seeing you on the road!"

ANTHRAX's tour with SLAYER kicked off this past Sunday, October 25 at 013 in Tilburg, The Netherlands. Fan-filmed video footage of the concert can be seen below.

Dette originally filled in for Benante during ANTHRAX's appearance at the Soundwave festival in 2013 and at a number of European shows in 2014.