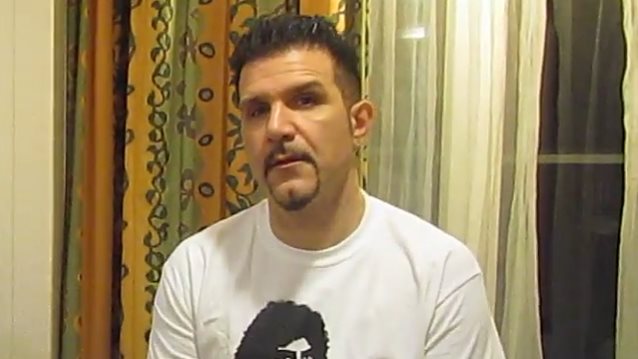 Jay Nanda of San Antonio Metal Music Examiner conducted an interview with ANTHRAX drummer Charlie Benante during this year's 70000 Tons Of Metal cruise. You can now watch the chat below. A couple of excerpts follow (transcribed by BLABBERMOUTH.NET).

On how he feels about ANTHRAX's latest album, "For All Kings", now that it's been out about a year:

Charlie: "I thought it was a very, very good… I consider it our second album in our second half of our career. Because I always felt [2011's] 'Worship Music' was the album that kind of re-established us, or put us back with Joey [Belladonna, vocals] and everything like that. So this was our second album. And the reason why this record, to me, was so good was because of the momentum going from 'Worship Music' to 'For All Kings'. We really got excited again, the fans got excited, and that really does something to a band — it really makes you hungry again, it makes you wanna do better. So this record was really, really, really a labor of love. Everything about it I loved — from start to finish, to cover, to everything. And then we have this crazy box set that comes out in two months. I put together this awesome box that has a bunch of 45s, and they're all different-colored vinyl. And each one… What is there? Nine of them, I think, or something… Anyway, from the first song, there's some B-sides on there, bonus tracks, there's some demos, there's some really cool stuff on there. And I think when people hear the two bonus tracks on there — we did a song by a band called KANSAS, we did a song by THE WHITE STRIPES — it's very 'here and there.' I think it's great."

On missing certain shows on ANTHRAX's tour due to his continuing battle with carpal tunnel syndrome (his temporary replacement is former SLAYER and TESTAMENT drummer Jon Dette):

Charlie: "Unfortunately, we're like athletes, and like athletes, they suffer from certain things. I suffer from carpal tunnel problems. But I try and do as much as I could when I can. So we still wanna keep the band… We don't wanna disappoint people. So that's why we do it that way."

ANTHRAX's concert Wednesday night (February 15) at the Barrowland in Glasgow, United Kingdom was filmed for a DVD, to be released later this year via Megaforce. Seventeen cameras, including five GoPros and a full-size camera crane, captured more than two hours of ANTHRAX favorites that were voted onto the evening's set list by fans and included "Madhouse", "Be All, End All", "Breathing Lightning" and "A.I.R.", followed by ANTHRAX's classic 1987 album "Among The Living" performed start to finish. In addition to the live footage, the DVD will include "fly-on-the-wall" interviews and other B-roll shot on the band's tour bus, backstage, in hotels and elsewhere.

ANTHRAX plays its last "Among The Kings" U.K. date Friday in Norwich and then heads to 22 European cities, winding up in Paris on March 16.