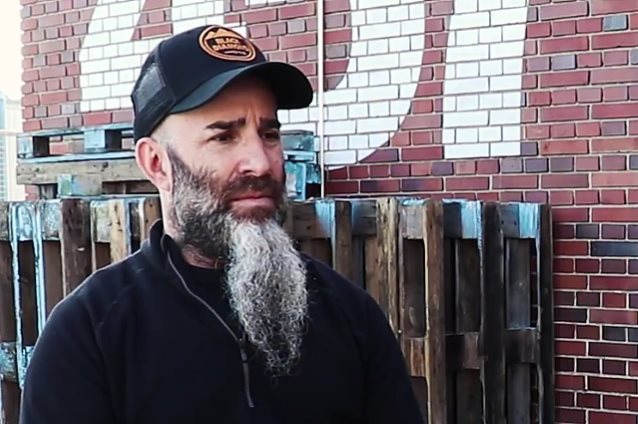 Switzerland's MetalInside.ch conducted an interview with ANTHRAX guitarist Scott Ian prior to the band's March 15 show at Komplex 457 in Zurich, Switzerland. You can watch the full chat below. A few excerpts follow (transcribed by BLABBERMOUTH.NET).

On how he feels about the current state of ANTHRAX:

Scott: "Tired [laughs], to be honest. We have two shows left on this tour. You know, after six weeks, everybody needs a rest, but obviously, [I'm] happy. I'm very happy with the way things are going. I'm not complaining about having to work because it's what we do. We've been working for 30-something years. But, yeah, it's great. The album ['For All Kings'] came out, like, a little over a year ago and it's been non-stop. Yeah, everything is good."

On the differences between the 70000 Tons Of Metal cruise and MOTÖRHEAD's Motörboat:

Scott: "You're asking the wrong person. I don't partake in any of the festivities other than playing my show. Every time I've been on a boat, I stay in my room because it's one of the few times I have where I can actually write and I have just time by myself, completely uninterrupted. I've gotten so much writing from that book [points to copy of his 2014 'I'm The Man: The Story Of That Guy From Anthrax' book] and I'm working on a new book right now. I had four days in my room on the boat to do nothing but work because my family stayed home and I was able to sit in there and work and work, and I got a lot of work done. For me, it's a great place to go be by myself and write. [I'm] pretty much the only person doing that on the whole boat. [Laughs]"

On who was the stronger drinker: "Dimebag" Darrell Abbott (PANTERA) or Lemmy Kilmister (MOTÖRHEAD):

Scott: "That would have been an interesting competition, though. You could have done a pay-per-view event and had the two of them just drinking to see who drinks the longest. Yeah, wow, that, I can say, no one has ever asked me that question before. That's a really good question. I don't even know… That's really, really hard to answer, actually. The only reason I would think Lemmy is just because he'd been doing it longer. He had more experience. That's not to take anything away from Darrell because Darrell was a professional. It's really hard to say. If I had to, if someone literally came up to me and put a gun to my head and said, 'I don't want your money, I want you to tell me who could drink more: Lemmy or Darrell.' I guess I would probably have to pick Lemmy. That's where my gut is telling me to go."

On which American heavy metal musician would be a good choice for President of the United States:

Scott: "I'm trying to think of someone who is actually super-smart who I know is highly-intelligent who could handle a real situation like that. You know what? I got it. It's not a metal musician, but he's worked in the world of heavy metal before with ANTHRAX: I'm going to say Chuck D from PUBLIC ENEMY. Not that he'd ever want that job. I would vote for Chuck D for president one hundred fucking percent. You know who else I'd vote for? Corey Taylor [SLIPKNOT, STONE SOUR]. Actually, I think Mike Patton [FAITH NO MORE] would be a great president, too. Now I'm starting to think of everybody. Mike Patton for president sounds good."

On what his role would be in one of these hypothetical presidential situations:

Scott: "I could be like a chief advisor, or the Secretary Of State. I don't need to be the boss. Let me travel around the world and spread the metal word. [Laughs] I'll be an ambassador."

On whether heavy metal music could be considered a religion:

Scott: "I think music in general, I agree one hundred percent. Certainly in the last year, back home in America for us, America has become such a divided country down these party lines of red and blue, Democrat and Republican. I really don't understand people on both sides because I'm not either one. I don't subscribe to either party. I'm a human being. I just go with my sense of right or wrong on every decision I make in my life. I don't understand why people don't look at things more that way rather than strictly by party lines. It's almost like people have been hypnotized. It's so crazy to me. I remember when things were not like this in America. It's become more divided than it's ever been in my lifetime, or maybe even since we had the Civil War in the 1800s. I just think it's a really strange place that America has gotten to. I've been thinking about this a lot and talking about it a lot, even onstage sometimes saying, when we're all under this roof, whether it's our show or a METALLICA show, or anyone, any type of music, whether it's pop or country or rap, you know if there's thousands of people out there, people are going to have differences in opinion. People are liking one candidate or the other candidate. This person likes this kind of TV show and this person likes this. Everyone has a difference of opinion on everything, but when everyone is under that one roof going to see a concert, everybody's heart and soul is in the same place and for the same reason. I know it sounds so cheesy and clichéd to say that, but music really is something that unites people. I don't know how to put that in a bottle and make people drink it to maybe change people's attitudes towards one another, but, shit, I know when we're playing ANTHRAX shows at home, half the crowd probably loves our president and half the crowd probably hates our president, but when we're playing, nobody gives a shit. I wish there was a way for people to find some more common ground in that way because we really can get along. We really can. We're all just people."

ANTHRAX and KILLSWITCH ENGAGE kicked off "The Killthrax Tour" this past Wednesday night (March 29) at the Wellmont Theater in Montclair, New Jersey.

With ANTHRAX and KILLSWITCH ENGAGE rotating the closing slot over the course of the dates, the tour will criss-cross the continent, wrapping up in Boston on May 7. The intense and dynamic THE DEVIL WEARS PRADA is providing direct support on all dates.