Ian and Benante share commentary throughout their takeover of Pandora's Classic Metal, offering never-before-heard insight into the making of ANTHRAX's albums. Gems include the story of how album-opener "A.I.R." was added last-minute to ANTHRAX's 1985 album "Spreading The Disease" and why Benante was inspired to cover the TRUST song "Antisocial", which appeared on the band's 1988 album "State Of Euphoria". Among other noteworthy song opinions, Ian reveals his favorite ANTHRAX song to play live, reminisces about penning his first love song, "Safe Home", for his then-girlfriend/now-wife, and discusses which track was inspired by a David Lynch film.

ANTHRAX's Artist Takeover Mode lands amid the group's 40th anniversary celebrations, which will culminate in a livestream performance on Friday, July 16.

"I was a 17-year-old metalhead kid from Queens when I started this band," said Ian. "I am a 57-year-old metal-head kid from Queens about to celebrate the 40th anniversary of this band. That means for 40 years, I've gotten to do exactly what I've wanted to do — and getting to do what I love and being a part of something so much bigger than myself has made the time, the unbelievable weight of 40 seems so light. It's been an amazing story so far, and I see 40 as a milestone that absolutely should be recognized and celebrated. Congratulations to us! I also see 40 as a stepping stone to the next chapter of ANTHRAX — we still have a lot to say and some killer riffs to unleash. I'm not going to say, 'Here's to 40 more,' because nobody wants to see that (I'd be 97). How about, 'Here's to at least ten more, and we'll go from there! Thank you for enabling me, my friends."

Pandora Artist Takeover Modes live on the platform's top stations and feature the biggest names in music across Pandora's most popular genres. Artist Takeovers feature music handpicked by the artist including a mix of their own songs and personal favorites from other artists, with special audio commentary describing their selections and what they mean to them.

ANTHRAX's latest album, "For All Kings", was called by some critics the band's strongest LP to date. Its arrival followed a five-year period during which the band experienced a rebirth of sorts, beginning with ANTHRAX's inclusion on the "Big Four" tour, and continuing with the 2011 release of comeback effort "Worship Music". 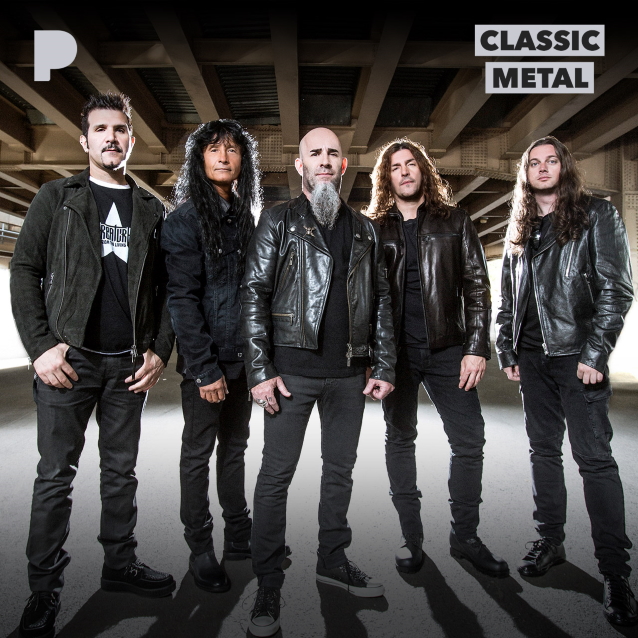