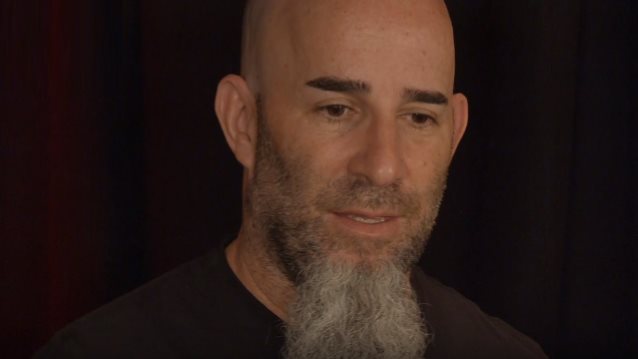 ANTHRAX members Scott Ian (guitar),Charlie Benante (drums) and Joey Belladonna (vocals) were interviewed at the Alcatraz hard rock and metal festival, which was held August 13-14 in Kortrijk, Belgium. You can now watch the chat below.

Speaking about TWISTED SISTER's announcement that it was calling it quits after a career-ending round of dates, dubbed "Forty And Fuck It - The Final Tour", Ian said: "I believe that it's the last [TWISTED SISTER] tour and the last show, but who knows? You know, look, if, two years from now, they have some big offers to come play at festivals somewhere, and they're all not doing anything, odds are maybe they'll play again. But it would be nice to see a band say that and then actually not come back."

According to Ian, there is one very simple reason why classic bands reunite, even after initially insisting they would never do so. "You know, money talks," he explained. "I mean, that's really… If you really wanna be honest about it, that's the reason why any band is gonna get back together. Especially on the level where they're a stadium act… And, actually, the only other [band besides THE BEATLES that has not reunited for a tour], and they only did it for the one show, was LED ZEPPELIN. They did the one show at the O2, and they've had offers. I mean, I've heard of offers out there… insane amounts of money, as you could imagine. And they haven't done it. Somehow I don't think Jimmy [Page] and Robert [Plant] are too worried about their finances."

Ultimately, Ian believes, reunion tours should not be so complicated to arrange, especially when the paycheck is large enough. "If you could go out and sell stadiums out around the world, and it'll take a year out of your life, why not?" he said. "Go do it. How's that not gonna be fun?"

Scott added that there are still a few bands that he would love to see reunite in their classic incarnations. "If ZEPPELIN announced tomorrow that they were coming around and touring, we would all go to that; in a second, we would all go to that show. So, as a fan, I would love to see [PINK FLOYD's] David Gilmour and Roger Waters get back together and do it one more time. There's so many bands that I would love to see. I never thought FAITH NO MORE was gonna come back. FAITH NO MORE came back. Steve Perry back in JOURNEY. Why not? One more time. Do it. [I would like to] see Peter [Criss] back in KISS. There, I said it. One more time."

ANTHRAX is continuing to tour in support of its latest album, "For All Kings", which came out on February 26 via Nuclear Blast.