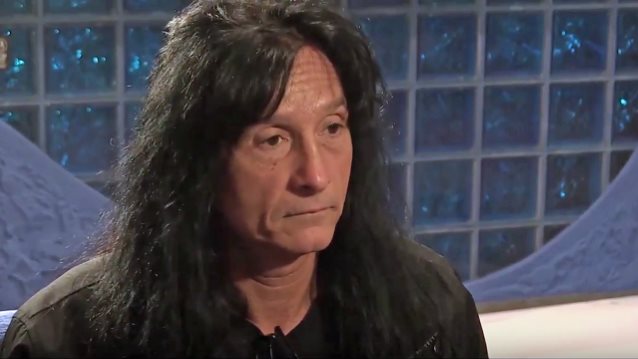 Poland's Rozmówki Muzyczne recently conducted an interview with ANTHRAX singer Joey Belladonna. You can now watch the chat below. A couple of excerpts follow (transcribed by BLABBERMOUTH.NET).

On how the music industry has changed since the 1980s:

Belladonna: "With the labels now, obviously, there's still music being released by labels, but the Internet, it takes over everything. And then record stores are not there. Where are the record stores? Where do you go to a store and go buy it? Now you've gotta order it online or you get it free. It's just different. It's tough. But we tour a lot, obviously, so it keeps us in the mix. But we still wanna make records. We love making records. It's fun to record and make new music."

On what is so fun about playing an entire album like "Among The Living" in its entirety:

Belladonna: "If I know the song, I can play it. It's never fun until you know it, 'cause some of the songs you had to relearn. I hadn't heard them in a while. I don't go back and start listening to old songs until I have to. I'm already listening to other music, and I move on with songs, so when I know what I'm doing, I love playing it. It doesn't bother me. I'm happy that people wanna hear the whole album… Like I said, once you know it, it's like playing any song. We just happen to be doing the whole thing, from start to finish. That's the only difference, really. I mean, we've done every song except for four. We had to relearn — just kind of touch up — four songs, and the album was complete to perform live."

On whether he ever thinks now that some of the "Among The Living" songs could have been played differently thirty years ago when they were originally recorded:

Belladonna: "Oh, yeah! When we play 'em now, the arrangements are so crazy. Just that alone — the way we wrote the songs — I think that you could easily say, 'Oh, we should have done this,' or, 'I would have done that.' Yeah, we're constantly thinking of things we could have done with the songs. We kind of mess with them live, too, a little bit — not much, but enough, just to put a little twist on it."

On whether he thinks streaming music services like Spotify are killing music:

Belladonna: "I don't know if it's killing anything. It's just tough, 'cause you can get [the music] from somewhere else. You don't have to buy it or something. I mean, I like buying [physical albums]. I buy records. If I've got a store at home, I like to buy a record. That was a cool thing [before downloading and streaming was introduced]. I mean, you listen [to music] on the iPod, I don't have anything… I can't look at it, see it. It's just something about all that stuff [being able to hold a physical record] that, to me, is more cherishable. Whether it's killing, yeah, it doesn't help anything. I don't know if kills it, 'cause there's a way we're still doing it. We still sell records and stuff."

ANTHRAX's European tour is scheduled to end in Paris on March 16.