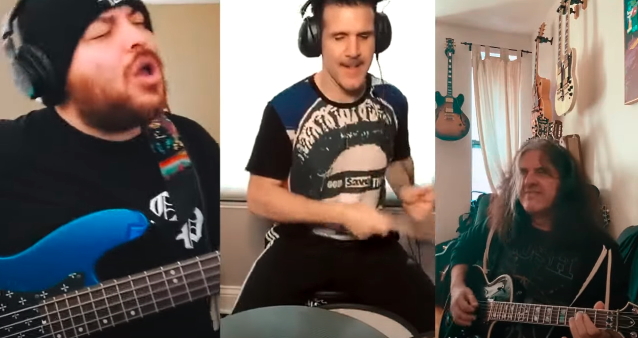 Charlie Benante (ANTHRAX),Alex Skolnick (TESTAMENT) and Roberto "Ra" Diaz (SUICIDAL TENDENCIES) have shared their version of another classic RUSH song, "La Villa Strangiato", recorded with each member separated in their own homes.

Benante uploaded a video of the performance to his YouTube channel, writing in an accompanying message: "The three of us - Alex, Ra,and Myself had so much fun doing our version of RUSH's 'YYZ' and are blown away by the positive response that we’ve received. So we've decided that the best way to say thank you is to do one more song. This one has been requested by some and again, will be recognized by every fan of RUSH. By popular demand: here is 'La Villa Strangiato'. Despite being an instrumental, the song tells a complete story, complete with plot and characters. It's based on some nightmares Alex Lifeson experienced.

"We hope you all enjoy it as much as we did playing it! Stay safe and wishing everybody a great week!"