On January 15, 2016, ANTHRAX will release a deck of custom "For All Kings" playing cards at indie record stores. There will be a download card inside that contains two tracks from the album prior to street date. On February 26 — the official "For All Kings" release date — the whole album will unlock.

On January 26, ANTHRAX will be at Vintage Vinyl in Fords, New Jersey to sign copies of their brand new custom playing cards. They will also sign posters with purchase of pre-order through Vintage Vinyl. They will sign one additional item with either of these purchases.

Pre-orderANTHRAX's "For All Kings" brand new custom playing cards or the new record on CD or vinyl and receive a wristband to attend an in-store signing event on January 26 at 6:00 p.m.

Each pre-order purchased includes one wristband. Each person attending needs their own wristband in order to get into the event. Wristband purchases are non-returnable. Only a limited number of wristbands will be available, so order yours while supplies last!

ANTHRAX guitarist Scott Ian told Overdrive about the "For All Kings" title: "The meaning, to me, for this title is that everybody can be a king. Everybody can have control over their own lives, control over their destiny, just by growing up and becoming a responsible human being. I'm not necessarily saying that being a "king" is being the boss in your relationship, or any relationship for that matter. A king of yourself is what I mean. Taking responsibility and ownership for your own shit is basically what it means to me."

Beginning in the fall of 2014, ANTHRAX — Ian, Charlie Benante (drums),Frank Bello (bass),Joey Belladonna (vocals),and lead guitarist Jon Donais — took their time in the studio recording the follow up to their Grammy-nominated, critically acclaimed 2011 album, "Worship Music". The band recorded some 20 original songs, almost twice as many as they had ever brought into the studio in the past. 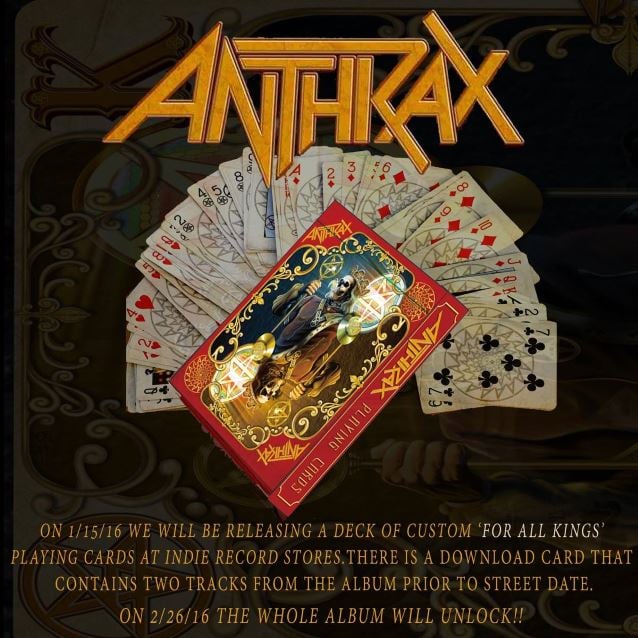