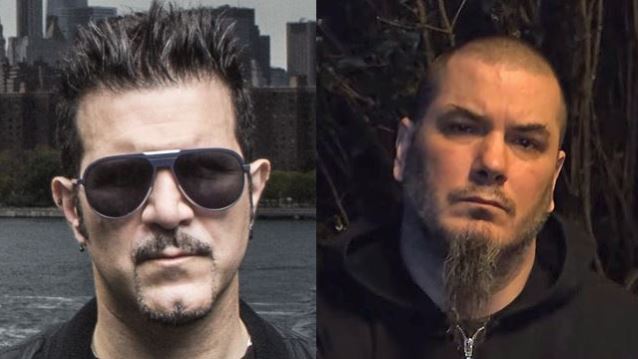 ANTHRAX drummer Charlie Benante has weighed in on last month's incident when ex-PANTERA singer Philip Anselmo made a "white power" gesture onstage at a concert.

Several notable musicians have come out and criticized Anselmo for his actions, including ANTHRAX guitarist Scott Ian, who suggested Anselmo show how sincere he is by making a donation to Jewish human rights organization the Simon Wiesenthal Center. Scott also wrote in an online post: "Philip's actions were vile and that should be the focus here; anything else is just noise."

Now Benante has defended Philip for his actions, explaining that Anselmo is "genuinely sorry for saying" what he did and calling the former PANTERA singer "my friend."

Speaking to the "Moshpit" radio show, which airs from the SYN Studios in Melbourne, Australia, Benante said (hear audio below): "I think Philip made a mistake. I think there were other things… other factors involved in that situation that people probably didn't see. And I've known Philip Anselmo forever, and I don't think Philip is a racist. I just think he's become the poster boy for this. And I know it shocked a lot of people and it pissed off a lot of people. But I think he's genuinely sorry for saying anything like that. And, yeah, he's my friend."

In an interview with Sticks For Stones, Ian said that Anselmo should be forgiven for his actions "if he proves that he deserves to be. Just asking to be forgiven doesn't mean you should be forgiven. And I've had a running dialogue with Phil since this happened. It's not like I just posted something online without actually speaking to my friend. I've been having a dialogue back and forth with him. 'Cause if I didn't care, I wouldn't have contacted him at all. But I cared. Phil, I've known the dude almost thirty years. He's like a brother; he's family. And when someone in your family has a problem, you discuss it and you try and find a solution."

Ian went on to reiterate the fact that he wants to see Anselmo learn from the incident and realize the error of his ways.