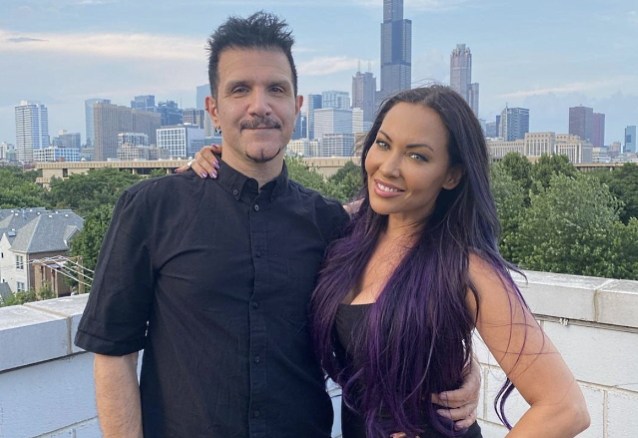 In a new interview with Anne Erickson of Audio Ink Radio, ANTHRAX drummer Charlie Benante was asked how he met his current girlfriend, Carla Harvey from BUTCHER BABIES. He responded: "Actually, we met at… Well, she says we met earlier, but I don't remember it. She says she interviewed me at the [Revolver] Golden Gods Awards, but I don't remember it, but she does have a picture of it, so I know I was there. And then we played a festival in San Bernardino [California] together. I think it was — it could have been Knotfest. And then afterwards, our manager said, 'Oh, the BUTCHER BABIES, they covered one of your songs for this, blah, blah, blah,' and I'm, like, 'Oh, cool.' And then, that's how I ended up meeting her, at that show. And we were both kind of interested in the same type of things — like, goofy, nerdy shit. But at the time, we were both kind of involved in marriages and stuff, and that was it. We would e-mail here and there, 'Hey, did you check out this book?' or, 'Did you see that?' And then that was it. I didn't talk to her for a bit. And then one day, I was in L.A. making a record, and I hit her up, and I said, 'You wanna meet around here, go get a coffee or something?' And, she turned me down. And then I hit her back up a little bit later, and she's, like, 'Okay, I've to gotta go to the art store in that area. Do you wanna come with me? And we ended up going to an art store. And that was it."

Benante and Harvey first went public with their relationship in March 2019 after dating for at least three years.

Back in 2015, Charlie named BUTCHER BABIES' sophomore album, "Take It Like A Man", one of his favorite releases of the year.

Before starting a relationship with Charlie, Carla was married to Gregory Coates since 2012.

Benante was previously married to Sandra, with whom he has a 15-year-old daughter, Mia Charley Benante.

Harvey makes a guest appearance on Benante's covers album, "Silver Linings", which was released on May 14 via Megaforce Records. The 14-track effort features an all-star cast of "who's who" in the thrash, metal, and rock worlds, with all cuts culled from Benante's acclaimed "quarantine jam" video series.