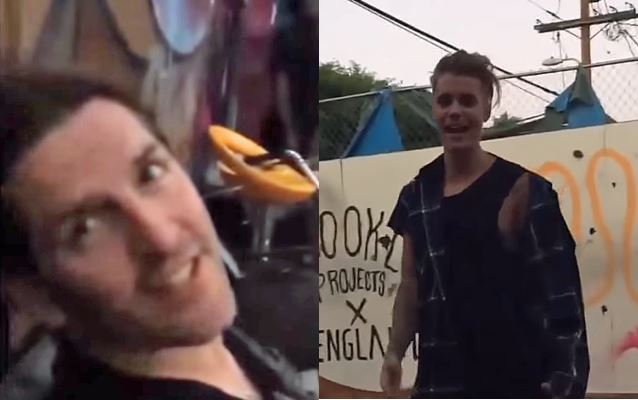 Video footage of ANTHRAX bassist Frank Bello and pop superstar Justin Bieber "talking shit" about Dom DeLuca (a.k.a. Brooklyn Dom),the owner of the Brooklyn Projects skate shop in Los Angeles, on July 28 can be seen below.

Bieber was recently slammed by heavy metal fans for wearing a METALLICA t-shirt.

The 21-year-old singer posted a photo of himself donning a wide-brimmed black hat along with an oversized black METALLICA top. This led to a torrent of abuse being hurled in his direction, with one Instagram user writing: "Take that shirt off you don't deserve it," while another added: "U r a disgrace to metallica." Someone else stated: "I love Metallica and I hate Justin Bieber."

The members of METALLICA were asked in a 2013 issue of Q magazine if they were "Beliebers" — a.k.a. fans of Justin Bieber — after Bieber claimed that the METALLICA songs "One" and "Fade To Black" were his "jams." Frontman James Hetfield replied, "Are we Beliebers? Yes." while drummer Lars Ulrich offered: "Is it possible to have respect for him without being a Belieber? I think the kid's really talented and obviously to go through what he's going through at that early age must be a mindfuck. So the fact that he still goes out there and does it, I admire that and I think he's super talented, so I guess I am kind of a Belieber. If he likes 'One', and Liam Gallagher likes him, OK, there you go."

Bassist Robert Trujillo added: "As long as he stays out of trouble, I'll be a Belieber."

Back in 2013, a backstage video surfaced of Justin Bieber performing an impromptu cover of METALLICA's "Fade To Black". The 15-second clip showed Bieber playing air guitar while he tried to recreate the guitar solo from the classic 1984 METALLICA track with his voice. Bieber was accompanied by his musical director Dan Kanter on guitar.

According to NME.com, Bieber previously revealed that he is a big fan of METALLICA, naming "Fade To Black" and 1988's "One" as two of his favorite METALLICA cuts. "Those are my jams," he told GQ in 2012.