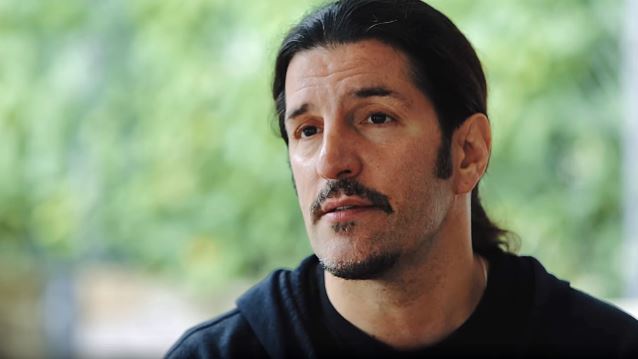 Sebastiano Mereu of From Hero To Zero conducted an interview with ANTHRAX bassist Frank Bello when the band played in Switzerland on June 18. You can now watch the chat below. A couple of excerpts follow (transcribed by BLABBERMOUTH.NET).

On how he defines success in an age when bands are selling a fraction of the records they used to:

Frank: "Illegal [music] downloading, let's face it, has killed the business; it really has. But my thing is, if you really want to do this, and I talk to the younger players out there, 'cause we need that next generation of players to come up, 'cause I rally around that. If I could do anything to inspire you to pick up and instrument and write that next riff, please do, 'cause we need that. I wanna see that. I have a ten-year-old son. I want him to have music in his life. I want him to be into whatever music he's into — whether it be metal, rock, whaveter. But I want music to be in people's lives; I think it's very, very important. So the only way you do that is, after all cycles… It's all cycles. The cycle will come around again when people get hungry to buy music and find another form, I hope, of ways to get it. And I believe in supporting bands and buying a record. I believe if a band works hard to write a record, you should support that band. And look, it's not that much money to buy a record, let's face it. Look, I say 'record,' but your download. Not your illegal download — your download. It's not that much money, if you think about it. It's a couple of cups of coffee at this point. So it's really… one hand washes the other."

On how being an artist in 2016 compares to how it was when ANTHRAX first started out in the early 1980s:

Frank: "Well, being a musician is not an easy life. What I say… I'm gonna say this to my son too. Finish your schooling, get all your stuff. I graduated high school; I graduated early to get into ANTHRAX, believe it or not. But it's definitely different. At least there were record companies back then. At least people were nurturing bands back then. People don't nurture bands anymore. There's very few smaller record labels that nurture bands. But, man, the only thing I can say to inspire people, and I hope I do… If you really want it, if you really feel like you have to… Like, we feel like we have to write music, we have to do this. I think if you're a younger person and you want to do that — or you're an older person; it doesn't matter — it's music, and you have to put it out. And just put it out there. And you have to work hard. You've gotta sleep in the vans, you've gotta drive… Sleep on the floors. Eat nothing. I mean, there were no food days for a while in the early days of ANTHRAX. You have to live it. You really have to live it."

ANTHRAX will join forces with SLAYER and DEATH ANGEL this fall for a seven-week North American beat down. The dates start in Cleveland on September 9 and will hit both major and secondary markets across the continent.