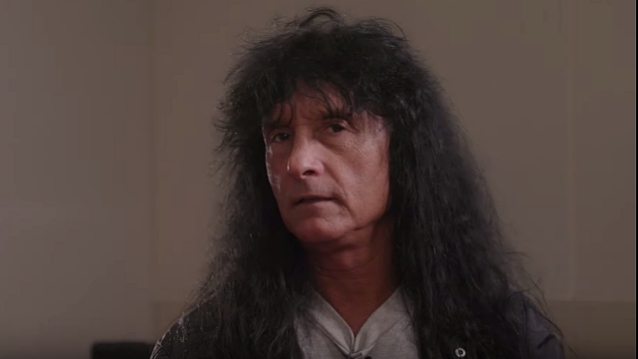 ANTHRAX's JOEY BELLADONNA On His Classic-Rock Covers Band: 'We Do About 60 Songs A Night'

When he is not busy touring and recording with ANTHRAX, Joey Belladonna plays drums and sings for a classic-rock covers band called CHIEF BIG WAY. The upstate New York-based group, which also features Dave Mickelson on bass, Joe Precourt on guitar and John Goodwin on keyboards, plays versions of songs from JOURNEY, AC/DC, ZZ TOP, BOSTON, CHEAP TRICK, FOREIGNER, PINK FLOYD, VAN HALEN, COLLECTIVE SOUL, THE WHO, THE DOORS, SHINEDOWN and BON JOVI, among others.

In a brand new interview with Sweetwater's Nick D'Virgilio, Belladonna stated about CHIEF BIG WAY: "We do four hours straight. I sing and play [drums] the whole night. We do about 60 songs a night. There's no setlist — just pulling stuff out of the hat… RUSH, JOURNEY, BAD COMPANY, LED ZEPPELIN, [THE ROLLING] STONES, ZZ TOP, [JIMI] HENDRIX, PINK FLOYD… It's a full, full slot of that type of music. Not many deep, deep cuts, but popular songs. Maybe people can't dance to it, but it's cool. 'Cause a lot of people just sit around and just listen. So it's okay. But I can't do that with [ANTHRAX]. [ANTHRAX] is an hour and a half — 45 [minutes] or an hour. And I'm bantering with the crowd during the songs, after the songs — a lot of that stuff. And it's moving. I'm more beat [playing with ANTHRAX] than I am in four hours [playing with CHIEF BIG WAY] — other than my butt, sitting for four hours. I literally don't get up; I just sit down for four hours."

Asked what the appeal is in performing with CHIEF BIG WAY, Joey said: "To do other music, and to do melodic-type stuff that I love, and just be able to get out and just play. It's just that certain thing that you get when you play. Driving in the car with the equipment, unloading it and setting it up, and then, 'Okay.' And we just start up — no banner. Just play, play, play and then go home. Put [the equipment] back in the car and go home. And these [other] guys [in ANTHRAX] wouldn't do that — there's no way. They wouldn't even walk in some of these bars — they really wouldn't."

Back in 2011, Belladonna admitted to Attention Deficit Delirium that "it's not an easy thing" singing and playing drums at the same time. "I never thought that I would sing and play 'Tom Sawyer' [RUSH] at the same time. Something that you think is easy to play is often not. 'Heartbreaker' by LED ZEPPELIN has so many different [drum] accents that have nothing to do with the song vocally. It's a good challenge."