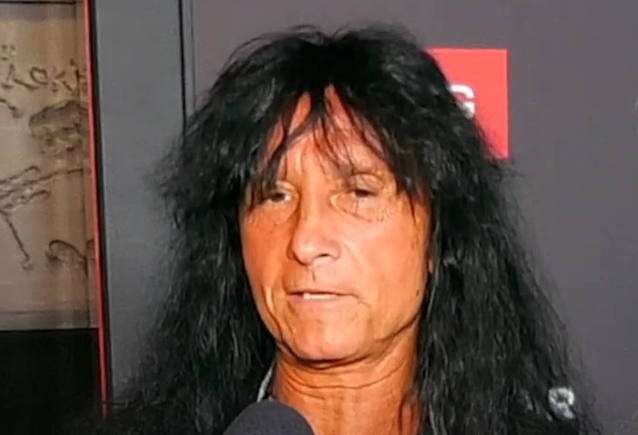 At this past Tuesday's (September 20) premiere of the first-ever career-spanning documentary on the life and times of legendary metal icon Ronnie James Dio at TCL Chinese Theatre in Hollywood, California, ANTHRAX singer Joey Belladonna spoke to "The Blairing Out With Eric Blair Show" about what life on the road is like for him nowadays. He said: "It's nice and easy. I'm very, very conscious of what I do and how I do it. I definitely take care of what I'm doing and I really appreciate myself to be able to take care of what I do and do it well. I don't wanna go out there and do it anything less. I'm always conscious about [that]."

Belladonna, whose most recent return to ANTHRAX was officially announced in May 2010, was originally the lead singer of ANTHRAX from 1984 to 1992, and was considered part of the influential thrash metal group's classic lineup (alongside guitarists Dan Spitz and Scott Ian, bassist Frank Bello and drummer Charlie Benante), which reunited and toured during 2005 and 2006. His voice was featured on over 10 albums, which reportedly sold eight million copies worldwide.

The 61-year-old upstate New York-based singer reflected on his initial departure from ANTHRAX three decades ago during an appearance on a recent episode of the "Beer Rum & Rock N Roll" podcast.

Belladonna said (as transcribed by BLABBERMOUTH.NET): "I didn't quit… Like, I wanted to sit around for 13 years while these guys just kept [going]. People don't wanna hear it, but that's the truth. Why would I quit?

"So, yeah, I didn't quit," Joey added. "I didn't quit anything. I don't want anybody thinking that, 'cause I wouldn't even have the heart to do that."

Belladonna also addressed the fact that he returned to ANTHRAX despite having been publicly dissed by some of the other members of the band in various interviews over the years.

"Some people are, like, 'Why the hell are you back with them? Why would you go back? That's stupid, man. You're an idiot. She cheated on you twice, dude. Don't go back with her. Come on, man. She's just gonna go out with that other guy tomorrow night,'" he said.

"It took them a long time to go, 'You suck. We didn't like you that much. And now you're all right.'

"Every day I walk in their presence in the room knowing that these people felt that way, 'cause I never felt that way about them," Joey admitted. "I don't feel that way about those people. I respect and I highly recommend everything that they do. And obviously I'm back. And I dig what we're doing right now, I dig what we're doing. But it's hard. It's hard. You get a complex, you know?"

Last year, the members of ANTHRAX opened up about their 1992 split with Belladonna in a 40th-anniversary video focusing on the making of the aforementioned "Sound Of White Noise" album. Regarding the decision to part ways with Belladonna, Ian said: "By the time we finished the year-and-a-half touring cycle — 20, 21 months of touring cycle, and then '[Attack Of The] Killer B's' comes out. I think the last thing we did together as a band with Joey was [our appearance] on [the] 'Married With Children' [TV show]. And then it wasn't long after that when we made the change. But it wasn't a quick decision. We were very much a united front, the four of us. Because otherwise it wouldn't have happened.

"There's never an easy way to talk about this stuff," he continued. "Certainly when you're in the thick of it, when it's happening, it's horrible when you're having to make a decision like this. But it just really came down to, creatively, we all just felt like there was just no way for the band to move forward. We had just hit a wall. It was the heaviest decision in the history of the band, certainly. And even that I feel like doesn't give it the weight that it needs. And there was never anything personal with Joey — it was never personal with him. It just really came down to the creative ability for the band, honestly, to move forward. And I hate that it's something that happened.

"Obviously, things are meant to be," Scott added. "I am somewhat of a spiritual person. I've seen and done enough in my life to know that sometimes shit doesn't just happen randomly. The way everything worked out in the end, with Joey coming back in 2010, and the band, for the last 11 years, being creatively better than we've ever been and in a better place than we've ever been, I have to say that I really believe that it all worked out for some reason. That doesn't make it any easier on Joey certainly; there's nothing I can say that ever would."

Belladonna had been critical of ANTHRAX's decision to fire him at the height of the band's success, telling MikeJamesrRockShow.com six years ago: "Personally, it sucks just to think all those years went by that I didn't really have a chance to do anything. 'Cause I could have sang on any of those records [that were made during the John Bush era]. Not to say that what they did was… whatever reason and whatever style and all that stuff. I could have easily sang that regardless, no bones. It would have been easy to sing. It's just I think they were chasing some other idea. I always say that, whether they disagree. I don't think there was any reason to move. But you know what? We're here now."

ANTHRAX's latest album, "For All Kings", which features Belladonna, came out in February 2016 via Nuclear Blast.