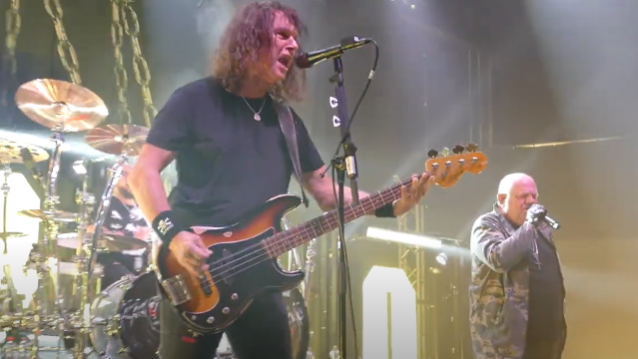 Former ACCEPT bassist Peter Baltes is playing bass for U.D.O., the band fronted by original ACCEPT singer Udo Dirkschneider, on the group's ongoing European tour. Baltes is filling in for U.D.O.'s regular bassist Tilen Hudrap who was hospitalized after the band's show in Munich, Germany on September 4.

Baltes made his live debut with U.D.O. on September 9 in Berlin, Germany. Fan-filmed video of the September 23 concert at Fabrik in Coesfeld, Germany and the September 21 show at Amager Bio in Copenhagen, Denmark can be seen below.

On September 5, U.D.O. released the following statement via social media: "Dear Fans, As you may already have heard, last night Tilen Hudrap, our Bass Player & invaluable member of the U.D.O. Family, had to be rushed to Hospital after nearly collapsing on stage. Tilen is a guy who would walk barefoot over burning coals to play a show, but his body, after Months of stress of every kind, just could not take it any longer. He is in excellent hands at a great hospital in Munich, where doctors are continuing to run tests on him to ascertain the quickest way to bring him back to full health. But for right now, the best medicine is rest.

"U.D.O. will continue the Tour without Tilen until he has fully recovered. The next two shows in Pratteln and Stuttgart will be performed without a Bass Player, then Peter Baltes will join us as temporary replacement from Berlin onwards.

"Of course we will all be devastated to not have Tilen on stage with us, but his health comes first, and as soon as he is able, you can be sure he will be up there, Rocking the World, stronger than before.

"We love you Tilen! Get well soon!"

Tilen added in a separate statement: "This is the hardest thing I ever wrote publicly.

"As a public person I feel compelled to write what I will write, especially because I owe it to the fans: the fans of the band, my own fans'n'supporters from all the years of touring and to everyone involved in this touring commitment going on at the moment.

"Yesterday my body gave in on stage.

"At the beginning of the world tour this was the last thing I wanted to do (to cancel ANYTHING, let alone a 3 month tour) so despite my burnout condition that I never talked publicly about and against the advice of my doctors and my family I went on tour to not let down my brothers in the band and the hardworking crew and management/booking agency. I always prided myself in being a road warrior and went through way crazier situations in my career so I thought this would not be a big deal (to do a nice 3 month tour). It turned out it was.

"(Un)Fortunately!!! My body gave in during the last two songs yesterday.
Respiratory alkalosis, total hyperventilation, uncontrollable tremors, momentary collapse of body functions and complete burnout. The doctors in the emergency room in München said I should never went on stage for the last week, let alone during the whole summer. My body was running on fumes. They basically saved me.

"I'm in the hospital now, writing this and thinking about everyone involved.
Sorry to everyone and all the fans, but I need to take some time to get back to 100%.

"Please know I would never not go play if it wasn't serious as it is. Most of this was caused by unreal amounts of no sleep, stress, e. rollercoasters and on top corona period. All this, plus decades of work that took me to where I am, put a price on my body.

"Yes, I remain in the band, the new album is in the works and someone nice will come to replace me indefinitely until I get back in shape for which you always known me for. You know I always gave 200% and always will!

"I will make a few updates in the following days to keep everyone in the loop. Got many worried msgs, I wanna assure everyone that I will be fine and come back stronger than ever. A metal heart is hard to tear apart!

"Last, but not least and most important: indescribable gratitude to my band brothers and crew for their support in the most dire situation yesterday and in general. I love you guys!

Two years ago, Baltes and former ACCEPT drummer Stefan Kaufmann were part of the songwriting team for U.D.O.'s album called "We Are One", a collaboration with Das Musikkorps der Bundeswehr, the military band of the German federal armed forces. Speaking to Canada's The Metal Voice about how Baltes came to be involved with the project, Udo said: "This was not planned. [Getting] Stefan Kaufmann [involved] was planned from the beginning on. He was helping us out on the last concerts, on the guitar. And he was sitting also with us together when we were talking about that we maybe wanna do an album. And he said, 'I wanna be the sound engineer. I have some ideas.' And then I said, 'Okay, no problem.' I mean, I never had any problems with Stefan Kaufmann. And then, one day, I was in Germany, and he said, 'Yeah, you have to do some demo vocals in the studio.' Then I said, 'Okay, I'll come then.' Then I came into the studio, but he didn't tell me this before, and Peter Baltes was staying there. Peter was there; he was doing some stuff with Stefan about his projects. Peter, after he left ACCEPT, he's doing so many things. And we were talking a lot of things. Then Peter said, 'You're doing a very interesting project. I have also some ideas, if you don't mind.' I said, 'Hey, Peter, no problem.' I mean, I never had a problem with Peter. Then Stefan and Peter, they came up with really good ideas."

He continued: "I'm not a guy to say, 'No. Nobody can come up with some ideas.' I mean, for this project, the most important thing was that we have really, really good stuff, and for me, it doesn't matter who was writing the songs or whatever. And [Peter] was really happy to do something like this. And also Stefan, I think, was really happy. Stefan did a great job. He was mixing in the end."

Asked how it was to reconnect with Peter and if there is any chance of Baltes joining U.D.O., Udo said: "It was a lot of fun to talk to him. I never had any problems with Peter. It was like we saw each other just yesterday, [meeting up for the first time] after 15 years, and also talking to him after 15 years.

"Peter in the band, to be the bass player in U.D.O.?" he continued. "He's doing so many projects; he's really busy. And we were not really talking about this. 'It would be great to have you now as the bass player in U.D.O.' [We'll] leave it like it is. If he does some stuff and maybe asks me to sing a song on his album — I think I heard he's doing a solo album — no problem, but to play in a band together again, I don't think so."

Udo's son Sven, who plays drums for U.D.O., added: "It would be strange as well, as we formed a very strong five-piece band. This is a very strong team, and everybody's getting along very well. So that would be a bit strange to now just say, 'Hey, but Peter's playing now, because he's Peter.' You would rip apart something we built up. And as you might know, we were looking for the right people for some time now, and now it works perfectly. And everybody's doing an amazing job — everybody's so good on their instruments — and we just found a good band. That would be strange."

💪🏻 Right before our show in Copenhagen, Denmark yesterday! 💪🏻

Today we‘re in Frederica, Denmark 🇩🇰 Come and join us on our GAME OVER Europe Tour 🤘🏻 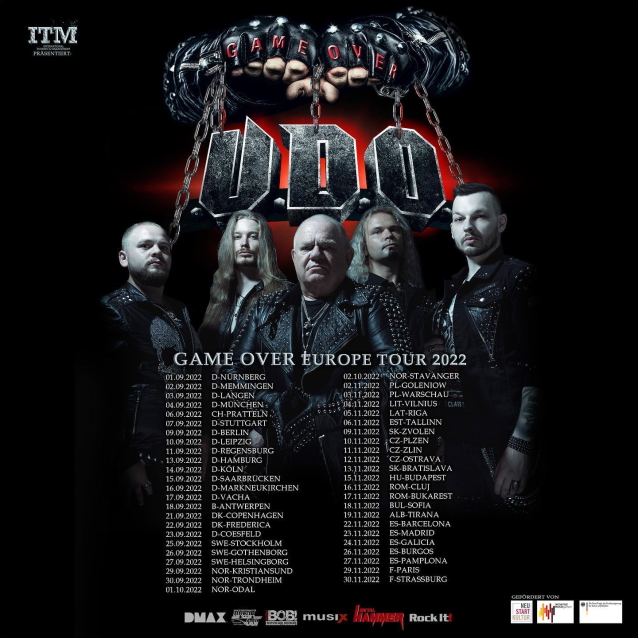