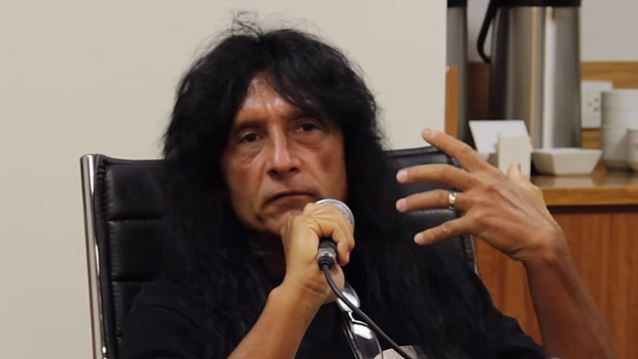 Kazagastão conducted an interview with ANTHRAX singer Joey Belladonna during the band's recent tour of South America with IRON MAIDEN. You can now watch the chat below.

Speaking about his exit from ANTHRAX in 1992 before officially rejoining the band in 2010, Joey said: "It's sucky that I was gone for that long, you know what I mean? I never understand that. It does bother me [that I was fired], even today, 'cause… We didn't miss a beat and I think we would have done… I can't imagine what we could have done along the way. No offense to anything else, but I just didn't see any reason for it."

Asked if he has heard any material ANTHRAX recorded with singer John Bush during the time Belladonna was away from the band, Joey said: "I don't listen to it. I have no interest in it. I don't know… Something about it. It doesn't really appeal to me, for some reason. I mean, I enjoy that they play the way they do and everything, I just never… I never was interested in it. It wasn't anything against [Bush] at all."

Although Joey did perform the John Bush-era song "Only" live with ANTHRAX on a couple of occasions, the track has since been dropped from the band's set. "We've got enough songs [that were originally recorded with me on vocals]," Joey explained. "We don't even do [all the songs] we should… We've got all these other songs we could play. But now we've got new stuff, so now we've gotta try to fit in four or five brand new songs."

He continued: "I always like to look at it like… I remember when [Sammy] Hagar came in [after joining VAN HALEN], he had to do the old stuff. But when [David Lee] Roth came back, he wasn't gonna touch anything, even though he probably would have a hard time doing it. So we've got enough material; I don't need to go back. I'd just as soon leave that alone. I mean, once in a while I get people complaining, and then after a while, it got really old too. I hate that whole thing, 'cause we're not even the same… We happened to be in the same band, but it's a completely different thing. And who's judging? What's the deal with that? To think that what he was doing, that he could have done what I did in the beginning, I don't believe that."

Joey went on to say that he dislikes being compared to any other other ANTHRAX singers. "That's what I hate about the whole thing," he said. "I hate that there was even anybody else in there that I have to… But now I just don't care about it — I really don't — 'cause I can't. To me, it's just a bunch of hype. It sucked in the beginning; it really did."