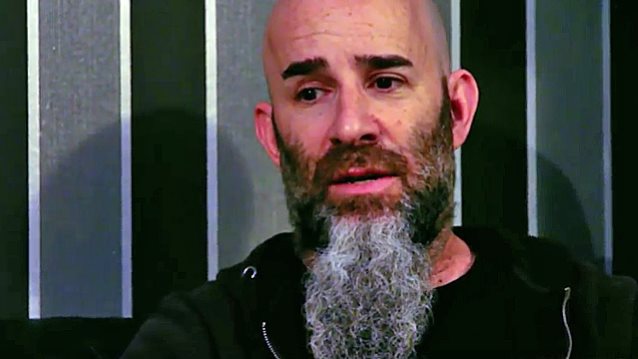 ANTHRAX's SCOTT IAN: 'If You're Stealing Music, You're An Asshole'

Brazil's Wikimetal podcast recently conducted an interview with ANTHRAX guitarist Scott Ian. You can now listen to the chat using the audio player below.

Asked if he thinks the surging popularity of music streaming services such as Apple Music, Spotify and YouTube is ultimately good for the music industry, Ian responded: "I really don't know. I think however you get your music… Here's my answer to that question: as long as you're not stealing music, then I don't care how you get it, whether you're buying vinyl or you're streaming it on Spotify. I think any way you can get your music… And I think if you're stealing it, then you're an asshole. That's all. [Laughs]"

In the past, Ian has been critical of music streaming services like Spotify and Pandora as a source of revenue for artists like ANTHRAX, telling From Hero To Zero in a 2015 interview: "Music doesn't have the same value in people's minds on this planet as it did ten years ago, twenty years ago… The commodity of music is worth less these days. Albums couldn't be cheaper. You could buy a brand new album, let's say on iTunes, you could buy a brand new CD for ten dollars. I mean, it wasn't that long ago where you had to go to, let's say, Virgin Megastore, which used to be everywhere. Albums back then in the States, a brand new CD would cost you at least seventeen dollars. That's not even including the gas to get there in your car, paying for parking sometimes. Now you could just sit at home and pay ten dollars. It's never been cheaper, and people still have a problem with that, apparently, because they'd rather steal it or stream it."

He went on to say: "Now, look, I get streaming — it's a modern convenience, it's the next step of where things are going, as far as how to get your music, and I don't have a problem with that. Look, I was one of the first people to get an iPod. I love iTunes, I love having all my shit right here in my phone; I love the convenience of that. I even like streaming, because it will turn me on to music that maybe I wouldn't have heard before and then I'll go and buy the record. But I just feel like, once again, bands are getting ripped off by these streaming services. If Spotify would pay more money to the bands for the art they're creating, I think just in general people would have a better view of music and think it was worth more. Music should be worth something. It is worth something. We're creating art, and these businesses have completely devalued what we do, and obviously I think that's bullshit."