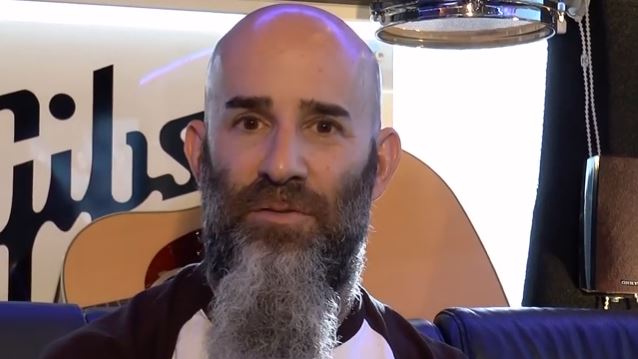 ANTHRAX's SCOTT IAN: Next Album Will Be 'Even Better' Than 'Worship Music'

Caleb Smith of "The Sick Room" podcast in New Zealand recently conducted an interview with ANTHRAX and MOTOR SISTER guitarist Scott Ian. You can now listen to the chat below.

Speaking about the progress of the recording sessions for ANTHRAX's follow-up to 2011's "Worship Music", Scott said: "'Worship Music' was a great record, and I think we have an even better record coming. We're literally in the middle of recording it. Joey [Belladonna, vocals] was out here [at a Los Angeles-area studio] singing all week, and we're working on lead guitar right now. So we'll just keep recording until it's done… I don't know… another month or two, on and off. 'Cause we're going out on tour here in the States and Canada. In about three weeks we leave… So we'll be gone for five or six weeks on that. And then we'll finish recording after that."

Asked if "Soror Irrumator (Lords Of The Rock)", ANTHRAX's contribution to the the second installment of "Catch The Throne: The Mixtape", for HBO's Emmy- and Golden Globe-winning series "Game Of Thrones", is a good indicator of what fans can expect from the band's forthcoming CD, Scott said: "That's just the tip of the iceberg. Obviously, we felt strong enough about it to put it out there as the first thing anyone was gonna hear new from us. But, yeah, it barely scratches the surface."

ANTHRAX will hit the road later this month. First up, a six-week-plus North American trek that will include 24 dates with VOLBEAT, as well as appearances at five major outdoor festivals — Northern Invasion (outside of Minneapolis),Rock On The Range (Columbus, Ohio),Rocklahoma (Pryor, Oklahoma),and the San Antonio and Kansas City Rockfests. Dates start in Denver, Colorado on April 24.

On this first leg, ANTHRAX will play a "fan favorites" set, comprised of band classics such as "Anti-Social", "Madhouse", "Caught In A Mosh", "I Am The Law" and "Indians". The set will also feature "Soror Irrumator (Lords Of The Rock)", which was made available on March 17 and is already getting airplay on hard rock radio. ANTHRAX's Frank Bello, Charlie Benante and Scott Ian are massive fans of the show, so having been asked to write a song for the "Mixtape" was an enormous thrill. You can hear "Soror Irrumator (Lords Of The Rock)" (and the entire mixtape) for free on SoundCloud and iTunes.

Tentatively due later this year, ANTHRAX's new album will follow the band's Grammy-nominated, critically acclaimed "Worship Music" that featured the return of "classic era"-vocalist Joey Belladonna, was named one of the best metal albums for 2011 by countless media outlets, and provided the band with the rock'n'roll comeback story of the year. The new album is also the recording debut for guitarist and newest band member Jon Donais.