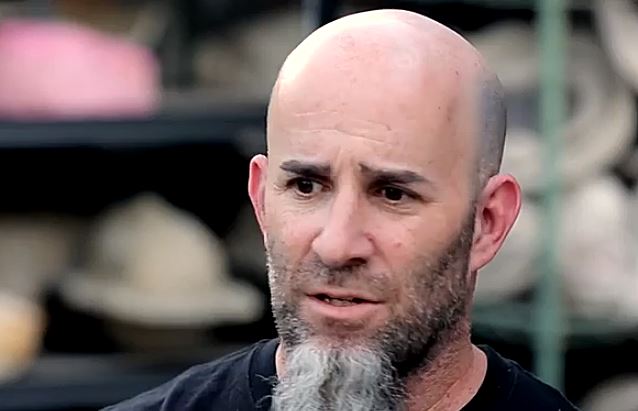 ANTHRAX's SCOTT IAN On Spoken-Word Tour: 'I'm Excited About These Shows Because It's Only Gonna Get Better'

Tim Louie of The Aquarian Weekly recently conducted an interview with ANTHRAX guitarist Scott Ian. An excerpt from the chat follows below.

The Aquarian Weekly: To me, you were always the charismatic guy in ANTHRAX. Does it shock you that they asked you to do a spoken-word show?

Scott: I don't know if shock is the right word, but I was definitely flattered that someone was willing to take a chance on me. Take a risk on something that's really not what I'm known for and it's not what I do. Someone thought that I had enough of a point of view and the ability to actually get on stage and entertain people who are paying money to come and see me. That takes a lot of faith and trust. It's not like I had some kind of a DVD out already where people can see what it was. I didn't even know what it was until I started doing it. And then I really learned how to do it. Just by being on tour and doing show after show. I really learned how to do this by doing it. I talked to a lot of my stand-up comedian friends, who all said the same thing: "The only way to learn it is to do it in front of people, and that's how you get better at it." And it's still fun for me to do. I still look forward to it because there are so many unknowns about it to me. It's something I'm obviously learning as I go. So I'm excited about these shows because it's only gonna get better.

Scott: No, it's where it belongs. If I could sell 5,000 tickets to one of these shows, don't get me wrong, I would be thrilled and I would be playing those-sized venues if I was as big as Jerry Seinfeld or something, but that I'm not. I'm at the bottom rung of this ladder right now. I'm working my way up. This is where it should be right now. I should be in these types of rooms. Just showing people who believe enough in me to actually spend their money and take a risk and see something where they really don't know what they're getting themselves into. I have such respect for our fans in general because these are fans who are willing to take a risk and do that and come out and check something out that's new without really knowing what they're getting themselves into. A lot of people don't want to do that these days, so anyone who comes to any of these shows, I just have so much respect for. I also think they're getting to see something really cool because it is so small and intimate and they're getting to see the closest thing to the real me that they're going to see when I'm standing on stage telling stories. There's also a Q&A during the show, where I tell people every night, "This is your chance. Don't be shy! You can ask me anything you want."

Read the entire interview at The Aquarian Weekly.