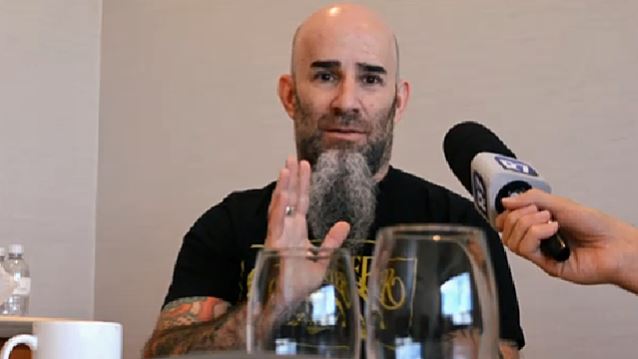 ANTHRAX guitarist Scott Ian says that AC/DC "should just stop" if Brian Johnson is unable to continue singing for the band.

Photos of GUNS N' ROSES singer Axl Rose and members of AC/DC leaving the same rehearsal studio in Atlanta last month were posted online by TMZ, bringing speculation to a boil that Rose will act as a guest vocalist for the veteran Australian band on at least ten shows. The group had to reschedule the gigs after Johnson was told by doctors to come off the road or face a total loss of hearing.

Asked for his opinion on reports that Axl might end up fronting AC/DC for some of the band's upcoming concerts, Ian told Brazilian journalist Luiz Cesar Pimentel of the news portal R7 (see video below): "I don't think anything. I guess I'll hear it at some point, and then I can make my opinion. I guess I could kind of imagine in my brain, but I don't even know what Axl sounds like now. I haven't heard Axl Rose sing in a long, long time. So, can he sing AC/DC songs? I don't know. I suppose AC/DC must think so, if it's true. So I'm sure I'll get to hear it soon enough on the Internet somewhere and then I guess I'll have an opinion on it."

He continued: "I wish they would get Angry Anderson, the guy who was in ROSE TATTOO. I don't know if Angry Anderson is still even singing anymore. But I always thought, in 1980, he was the guy. I didn't know who Brian Johnson was yet, but I knew Angry Anderson in 1980, and when Bon [Scott] died, I was hoping Angry Anderson was gonna join AC/DC, 'cause he was from Australia and he sounded like a guy who should be in AC/DC. But then Brian came and Brian was great. So who knows?"

Ian added: "My personal opinion is, without Brian at this point, I think they should just stop. Why? Why? You're AC/DC. I don't think they need the money. It would be pretty hard to imagine that they still are out there working because they need money. But who am I to say? It's just my opinion. But I wish… If Brian is done, then I wish the band would stop. That's just my personal, shitty opinion."

Ian also talked about the retirement of AC/DC's founding guitarist Malcolm Young, who is suffering from dementia. He said: "It's very depressing. It's certainly worse for… Look, I'm just a fan. It's different for Malcolm personally and for his family and his friends. Obviously, it's a terrible, terrible situation. I'm just a fan of his, so it makes me sad that someone that has meant so much to me is sick. I just hope that he's in peace, [that] he doesn't have pain."

He continued: "Anytime your heroes are not doing what they do anymore, it sucks. But I understand it, too, at the same time. I don't wanna see my favorite band trying to be on stage when they're eighty years old and not being able to perform anymore. It was hard to watch [MOTÖRHEAD frontman] Lemmy at the end. We played a whole bunch of shows with MOTÖRHEAD in September of last year in the States, and then we did the Motörboat cruise with them again. And it was great to see them, but at the same time, you can't help but think, 'Lemmy really… he shouldn't be on stage anymore. He's having a hard time.' But you can't argue. 'Cause Lemmywanted to be there. No one was forcing him to play shows. He wanted to be on stage; that was his life. But as a fan, you know, you just can't help but think, 'Goddamn, he should just go home and play the fucking slot machines and just relax for a few years now. He's worked hard enough.' But that's what he loved to do, so you can't argue with that."

Ian went on to say: "But, yeah, I don't ever wanna see my heroes slow down, but it's just a fact of life; that's what's gonna happen. It's gonna happen to me. At some point, I'm not gonna be able to bang my head and jump around on stage the way I do now. But Angus is still doing it, and he's maybe ten years older than me or something, so it means I have at least ten more years. [Laughs]"

AC/DC postponed the last ten dates of its recent North American tour due to Johnson's condition, promising to make them up and possibly use "guest vocalists."

The band reportedly began meeting with potential guest singers in Atlanta, during which Rose was also spotted in the city.

Not yet known is Johnson's future status with AC/DC. Johnson has fronted the group for 36 years, but it is not clear whether his hearing issue will prevent him from performing live with them again.

Also not known is the official position of GUNS N' ROSES on Axl's possible stint with AC/DC. Three-fifths of the classic GUNS lineup — Axl, Slash and Duff McKagan — reunited for a show in Hollywood on Friday and is set to play more six concerts this month and a North American tour later this year.

The rescheduled North American dates for AC/DC have not yet been announced. The band's next confirmed shows take place in Europe in May.