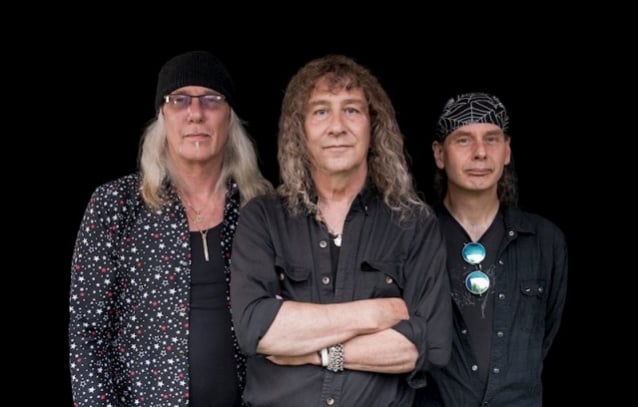 Canadian metal legends ANVIL will embark on a U.S. tour in June. They will hit the road in support of their new album, "Impact Is Imminent", which will arrive on May 20 via AFM Records.

ANVIL guitarist/vocalist Steve "Lips" Kudlow stated about returning to the stage: "Hell and high water has come and gone. Now it's time to rock! It can't happen soon enough!"

On "Impact Is Imminent", ANVIL fires off merciless riff attacks, relentlessly driving drums and impressive bass grooves, complemented by vocal melodies and lyrics that inevitably drill themselves into the listener's aural tract. As always, Lips and Reiner are at the epicenter of this heavy metal extravaganza. For the past eight years, they have been supported by bassist Chris Robertson, who not only complements the ANVIL fold on a personal level, but also enhances the tracks with his powerful low frequency bass parts and backing vocals.

Earlier in the month, ANVIL shared a first single alongside a music video for the full pedal-to-the-metal anthem "Ghost Shadow". Lips stated about the track: "'Ghost Shadow' is my sixth sense telling me I'm being watched. Could be Internet trolls or paranormal phenomenon. Either way, the song is heavy as fuck."

Regarding "Impact Is Imminent", Lips said: "None of our previous albums blends music and lyrics into as tight a unit as 'Impact Is Imminent'. Everything comes together homogeneously. As a result, the new material sounds monolithic, right down to the very last details, both in terms of rhythm and harmonies. In the past, our studio sessions were sometimes like a little like jumping in at the deep end, with us having to improvise a lot and making decisions at short notice. Working on 'Impact Is Imminent', not only was there plenty of time for the songwriting process in the run-up to the recordings, but I also had the leisure to put all my ideas to the acid test and work on them until they were perfect."

Like its three predecessors, "Anvil Is Anvil" (2016),"Pounding The Pavement" (2018) and "Legal At Last" (2019),"Impact Is Imminent" was produced by Martin "Mattes" Pfeiffer and Jörg Uken at Uken's Soundlodge studios.

Last month, Lips told Canada's The Metal Voice: "The whole thing is a bit weird and odd because we put out an album and then never got to tour for it," referencing the aforementioned "Legal At Last". "So it's, like, where is the tour for the last album already? So, what is the last album, just spinning our wheels? What was that? What happened? Now I'm in a position where I'm putting out another album, and I'm gonna have to actually try to push both albums. It's, like, I don't know. I've never been in a position like that."

Lips added: "And then at the same time, while all this is going on, I got back from [recording in] Germany, of course, in October and have been writing songs since I got back. Because, of course, the last song I wrote was before I left — months before — so I had months of time off, not doing anything. So we started back in on it. We're at [song] number 10 already — for the next album."

ANVIL, a Toronto-based group, was formed in 1978 by childhood friends Kudlow and Reiner. Both came from Jewish families and had been playing music together since their teens. ANVIL is considered to have been an influence on many metal bands, including METALLICA, MEGADETH, SLAYER and ANTHRAX.

In a 2015 interview with the Chicago Tribune, Lips stated about ANVIL's longevity: "We learned a very early and very brutal lesson in our younger years — you don't let up, ever. You keep the tank full and you keep driving it. You don't stop. 'Cause stopping means that you're gonna slip. So we've been on this survival-terror mode to keep it going."