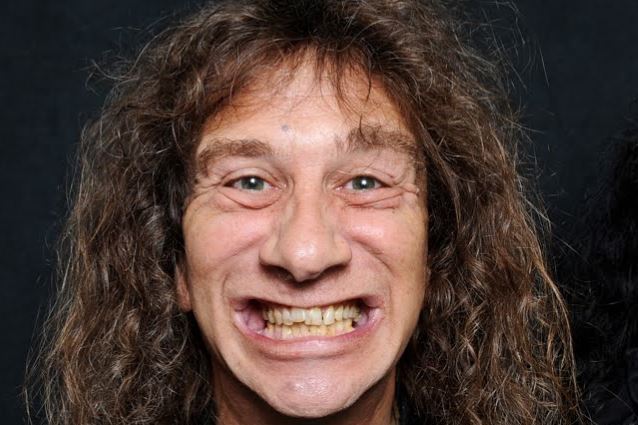 ANVIL Frontman On America: 'People In That Country, Generally Speaking, Are Lazy, And If They Can Go On Welfare, They Will'

Ivor Whitten of Belfast Metal conducted an interview with Steve "Lips" Kudlow of Canadian metal legends ANVIL prior to the band's February 13 concert at The Limelight 2 in Belfast, United Kingdom. You can now listen to the chat using the SoundCloud widget below.

Speaking about why ANVIL's 2008 documentary, "Anvil! The Story Of Anvil" — which followed the aging Canadian metal band on an increasingly ill-fated tour — seemed to be received more favorably in some parts of the world than in others, Lips said (around 5:55 mark in the interview): "What's a really fascinating aspect [is that] in countries where the work ethic is really, really tough, where people really have a good, good, good work ethic, it doesn't matter how hard you have to work, you just go work. [And] those countries seemed to embrace the ANVIL story more than others… From my personal experience, in America, it's pretty much taken for granted and people kind of look at it like, 'So what?' Because people in that country, generally speaking, are lazy, and if they can go on welfare, they will. They don't have work ethics. So how could they relate to a story about somebody who keeps trying and being faced with adversities and failures? That's not the American way. The American way [is]: if I don't succeed right away, quit and go on to something else. And that's where the difference lies. I really noticed that in particular the movie really struck hard in the U.K. and in Ireland and in Sweden and in Germany. These are places that have very, very, very heavy-duty work ethics. People work because they want to, not because they have to."

"Anvil! The Story of Anvil", was named one of 2009's best documentaries by a slew of film critics associations across the continent, including critics in Chicago, San Francisco, Toronto, and Las Vegas, as well as the International Documentary Association, the Online Film Critics Society, and the National Society of Film Critics. It also made the year-end Top 10 lists in publications such as the New York Times, Washington Post, Newsweek, and Village Voice.

"Anvil! The Story of Anvil" was the directorial debut of screenwriter Sacha Gervasi ("The Terminal") and was produced by Rebecca Yeldham ("The Kite Runner" and "The Motorcycle Diaries"). The film follows Kudlow and Reiner and their band, ANVIL, which released one of the heaviest albums in metal history, 1982's "Metal on Metal". The album influenced an entire musical generation of rock bands, including METALLICA, SLAYER, and ANTHRAX, who all went on to sell millions of records. ANVIL, on the other hand, took a different path — straight to obscurity. The film was both entertaining and touching as it followed their last-ditch quest for the fame and fortune that has been so elusive to them.