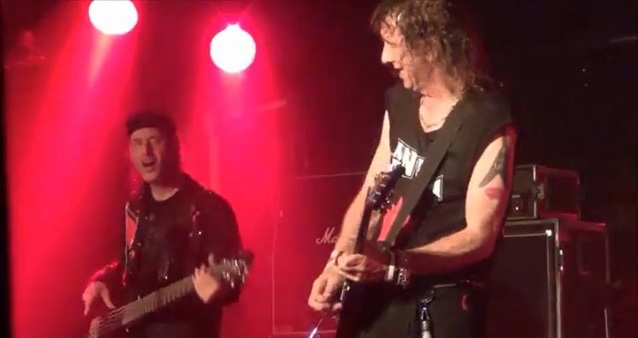 Canadian metal legends ANVIL have parted ways with bassist Sal Italiano and have replaced him with Chris Robertson. ANVIL frontman Steve "Lips" Kudlow tells M.E.A.T.'s Drew Masters that Chris has actually been part of the ANVIL camp for some time now, having been both their rehearsal bassist as well as a member of their road crew. Lips also stated that he's glad the band is, once again, "all Canadian — that is the heart and soul of ANVIL."

ANVIL's fourth bassist, Sal Italiano, joined the band as the replacement for Glenn Gyorffy (a.k.a. Glenn Five or G5) in January 2013.

Italiano was a member of the Long Island, New York IRON MAIDEN tribute band LIVE AFTER DEATH and original progressive metal act THE NIGHTMARE STAGE, as well as a former member of the acclaimed '80s heavy metal group CITIES.

Glenn joined ANVIL in 1996 and has appeared on seven of the band's albums, including "This Is Thirteen" and the group's 2011 release, "Juggernaut Of Justice", on which he wrote and sang the song "This Ride".

Fan-filmed video footage of ANVIL's July 25 performance at the Headbangers Open Air festival in Brande-Hörnerkirchen, Germany — featuring Robertson on bass — can be seen below.

Released on May 27, 2013 in Europe and May 24, 2013 in Germany on SPV/Steamhammer, "Hope In Hell" is available in four different formats: as a limited-edition digipak including two bonus tracks, as a jewel case CD, double gatefold colored vinyl LP and as a digital download.