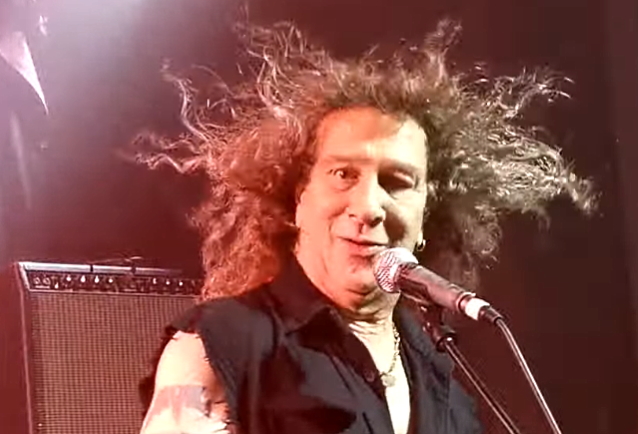 ANVIL's LIPS: How I Have Evolved As A Songwriter

In a new interview with the French metal radio show "Metal Zone" on Oxygène Radio, ANVIL frontman Steve "Lips" Kudlow spoke about the band's unwillingness to pay attention to music trends while working on new songs. He said (as transcribed by BLABBERMOUTH.NET): "It was never about radio play. It was never about being posers. It was always about high-integrity, as-heavy-as-possible music. And that's what it was really about. And we didn't wanna become one of the bands that puts out a couple of heavy albums and then goes soft and tries to get on the radio; that was not our idea. We wanted to stay true to what we started and continue to do."

Asked how he has evolved as a songwriter since ANVIL's inception more than four decades ago, Lips said: "Yeah, I would say I've learned a lot of things. One thing I've learned more than anything else is about self-recognition. I think that I lacked my own belief in myself and didn't realize that, really, I shaped and formed everything all along and I didn't really need the help and that help generally was more of a hindrance than actually helping. And that's what I've kind of discovered more in the later years, that I probably could have done a better job in earlier records had I taken the bull by the horns and been a tyrant and overstepped everybody who was trying to get their two cents in. Because what generally happens [is] I have a vision, I have an idea and I have the whole song in my mind, and if I come into rehearsal and if it's not completely settled with me, it ends up going off topic and off target, because I've allowed other people into the equation that they're not gonna know what's gonna happen or how to really do it. It's a much more pure place that I'm coming from now. I sit down and write all the music, I create all the guitar parts before I go in. Then I present it to the other two guys, and they write their accompaniment to it. That seems to be the best format. I don't have to have a discussion with the singer, because I am the singer."

A remastered edition of ANVIL's acclaimed documentary, "Anvil! The Story Of Anvil", received its premiere in conjunction with Beyond Fest on September 22 in Los Angeles at the Saban Theater, where ANVIL also performed, along with appearances from surprise musical guests, including ANTHRAX guitarist Scott Ian. This was followed by a question-and-answer session with Kudlow and ANVIL drummer Robb Reiner, producer Rebecca Yeldham and director Sacha Gervasi, moderated by Steve-O from "Jackass".

The remastered "Anvil! The Story Of Anvil" will be released on digital later this year via Utopia alongside Portobello Electric. The new version of the film will arrive in time for its 13th anniversary and will feature remastered picture and sound, as well as a new exclusive epilogue interview with Gervasi, Kudlow and Reiner moderated by former MTV host Matt Pinfield.