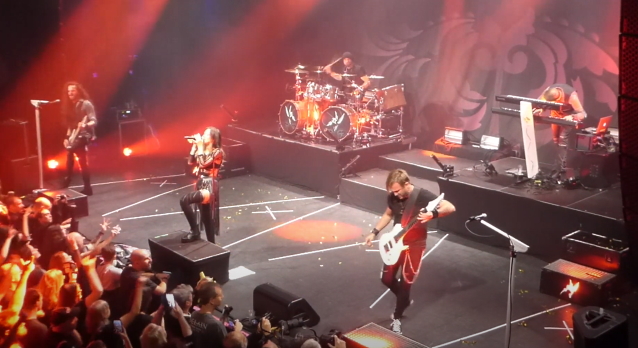 Earlier today, DELAIN shared a few photos from last night's concert and included the following message: "No words can describe what happened yesterday at Hedon… it was pure magic!

"DELAIN is back in business, and this SOLD OUT show is the ultimate proof! Pure energy and enthusiasm it's what we breathed during our set, and all we needed.

"Thanks to all of you who took part of this unforgettable event. Thanks to HAWXX for partying with us and to our very special guests Ivar de Graaf and Paolo Ribaldini who joined us on stage for such an epic moment! (By the way, exciting news about it very soon)

"Once again, thank you all from the bottom of our hearts. Until next time, Delainers!"

17. Mother Machine
18. Control The Storm (with Paolo Ribaldini)
19. We Are the Others

This past August, DELAIN released a new single, "The Quest And The Curse", featuring the band's trademark bombastic riffs, lush orchestrations, elements from film music, metal, pop, electronic, and much more mark an amalgamation of the old and new, and build the next chapter of DELAIN's history.

This past September, Charlotte was asked in an interview with Spain's The Metal Circus TV how she felt about the fact that DELAIN recently made a comeback with a new lineup. Wessels said: "I'm trying not to engage with it too much, honestly. I've seen positive responses about it, which I think is good. But I do try to keep some distance and just focus on what I'm doing rather than checking that out, because I still don't feel like that will make me happier per se."

No words can describe what happened yesterday at Hedon… it was pure magic!

Delain is back in business, and this SOLD...

Delain with new and returned band members in a sold out Hedon.

Last night I went to Hedon in Zwolle, Netherlands to see the reformed Delain. I did wonder if I’d ever hear their music...