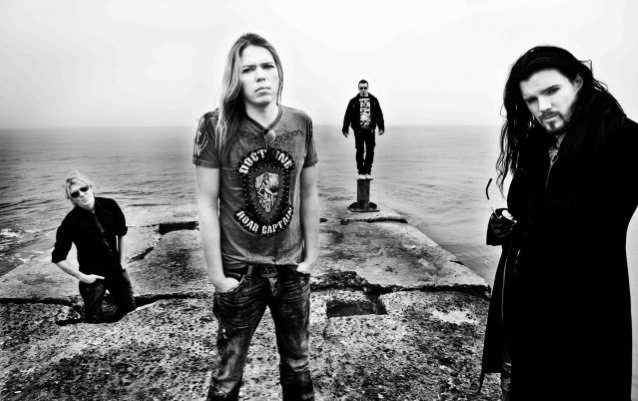 Innovative Finnish cello rockers APOCALYPTICA are putting the finishing touches on their eighth full-length studio album, to be released early 2015.

Having collaborated with artists like Gavin Rossdale (BUSH),Dave Lombardo (SLAYER) and Ville Valo (HIM) on past studio albums, APOCALYPTICA have now taken on a new musical challenge: For the upcoming LP, the band is working with Franky Perez as exclusive singer on the vocal tracks — this time not only during production, but for the whole cycle, including the tour. Perez released his debut in 2003, later teaming up with SYSTEM OF A DOWN's Daron Malakian and John Dolmayan as SCARS ON BROADWAY. In 2009, Perez handled vocals for Slash's solo band, followed by collaborations with Dave Kushner (VELVET REVOLVER) as well as Scott Shriner (WEEZER),Joey Castillo (QUEENS OF THE STONE AGE) and Dave Warren ("The Simpsons") as PUSHER JONES. After being honored as vocalist for THE DOORS at the L.A. Sunset Strip Music Festival, he released his latest solo album, "Addict", in 2013. For APOCALYPTICA, working with Perez on the entire project elevates the musical vision to a new level of coherence between studio production and live performance, as well as renewing the focus on the band's homogeneity after the recent feature projects.