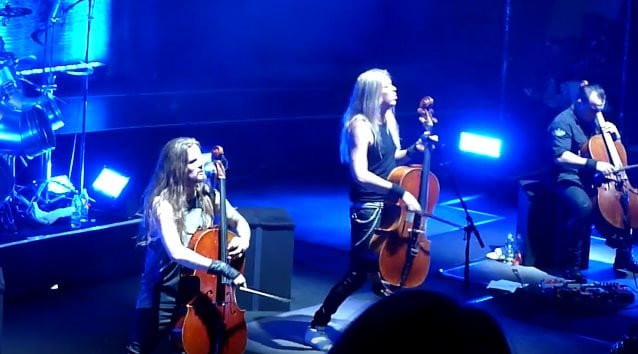 Finnish cello rockers APOCALYPTICA have released a new video for their cover version of the METALLICA classic "Sad But True".

Says APOCALYPTICA: "We brought a camera crew along to our Berlin show to film it all for our new video for 'Sad But True'!"

The Finnish band has spent the last few months touring in support of the twentieth-anniversary re-release of its epic debut, "Plays Metallica By Four Cellos".

APOCALYPTICA's Eicca Toppinen said this past summer that fans will have to wait until at least the end of 2018 before they hear the follow-up to the band's 2015 album, "Shadowmaker". Toppinen said: "We [are now] focus[ing] on this, touring-wise, this ['Plays Metallica By Four Cellos'] concept," he said. "Originally, I thought, 'Hey, let's make the anniversary thing. Let's play a maximum of thirty shows.' Because, first of all, we didn't know how interesting the concept we [could] create, how it [was] gonna work out. But suddenly it turned out great — the concept is really good, and there seems to be a lot of demand; people want to see it — so we thought, 'Okay. If people want to see it, let's do it.' So now we are gonna play maybe one hundred and fifty shows of this concept."