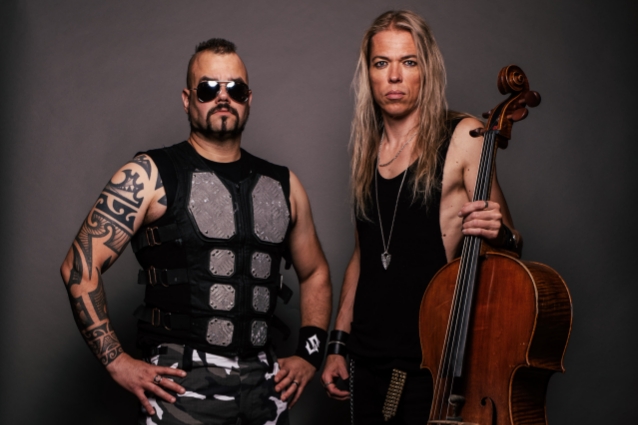 The song boasts an undeniably dynamic liaison in heavy metal — the spellbinding music of APOCALYPTICA and the potent vocals of Brodén coming together to create a fierce battle cry focused on the desecration of our planet. Released via Silver Lining Music, "Live Or Die" was composed by APOCALYPTICA and recorded in Finland with APOCALYPTICA and Martin Hansen (SCORPIONS) producing. The video, directed by Ville Juurikkala and filmed in Berlin, is a fiery performance piece that features Brodén on vocals.

APOCALYPTICA and SABATON have a new but notable history of collaboration. Most recently, the two bands recorded a version of the 2010 SABATON track "Angels Calling", released in November 2019, with a companion music video. In addition, APOCALYPTICA was special guest on SABATON's just-concluded, critically acclaimed 15-country European tour, that included APOCALYPTICA joining SABATON onstage every night for a half dozen songs. As one U.K. reviewer wrote: "The chemistry between the two bands was absolutely incredible. APOCALYPTICA were throwing around their cellos just as hard as SABATON were throwing around their guitars."

In support of their current studio album release, the all-instrumental "Cell-0", APOCALYPTICA — cellists Eicca Toppinen, Perttu Kivilaakso, Paavo Lötjönen and drummer Mikko Sirén — will kick off the first leg of their 2020 North American tour on May 3 in Orlando, Florida. The band will bring their moving and live performances to 20 cities over a three-week period wrapping up on May 26 in Boston, Massachusetts. With a setlist that will vary night to night, APOCALYPTICA's performances will be comprised of new songs from "Cell-0" as well as from the band's rich catalog. LACUNA COIL will support on all North American dates.

While Europe will enjoy one of the most engaging, exciting and "Apocalyepic" events of the year this coming autumn 2020, when the cello metal giants APOCALYPTICA unite with EPICA to entertain audiences all over the continent, from Budapest to Barcelona, on the "Epic Apocalypse Tour". The two will co-headline, showing both a refreshing camaraderie and lack of ego, and will be joined by the exciting, progressive metal band WHEEL, who will open each night with their engaging time-defying grooves and deep social exploration.