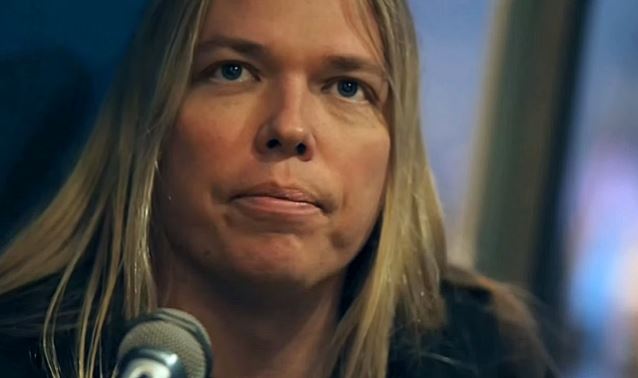 On Febraury 9, Kaaos TV conducted a video interview with Eicca Toppinen of Finnish cello rockers APOCALYPTICA. You can now watch the chat below.

Asked about APOCALYPTICA's decision to work with only one singer, Franky Perez, on the band's new album, "Shadowmaker", Eicca said: "I think we made a great choice, because Franky, now we've been working with him on the record, and we played a couple of shows, he really fits into the group. We were a bit concerned about that. You know, four dudes from Finland, we've been working together for [so long] and we've known each other almost all our lives, and we have our Finnish habits. So how would a guy from Las Vegas — who was born and raised in Vegas — how would he fit into the team… And he fits like he's been always around. It's really good. So we are really excited to get on tour, because then when you get on tour and you perform night after night, that usually shows you whether it's falling apart or it's getting really tight together."

Regarding APOCALYPTICA's decision to work with Grammy Award-winning producer Nick Raskulinecz (FOO FIGHTERS, DEFTONES, MASTODON) on "Shadowmaker", Eicca said: "We approached him when we were really sure what kind of album we wanted to do. And so, we didn't want to get anybody involved before we knew that, 'Okay, this is the record we're gonnna make.' And we made pre-production with him. I think it was a clever move from him. He said, 'No, we are not going into the studio. We need to do pre-production. I want to rehearse the songs together with you and we need to know that these are the songs we're gonna record.' And we did a great, very inspiring session with him in August. It was, like, six of us — we, Franky and Nick — in one room, playing songs through and changing it, throwing ideas and changing the structures of the songs, arrangements, finding the right tempos for the songs. I think it was really inspiring. He's like a big child. He's so excited about music all the time; he loves music. And during the recordings, he was all the time able to keep a very positive, inspiring atmosphere in the studio, which is very important. And he was all the time… He was not so much nagging about little details; he was more like… he wants to get [good] performances. 'Cause when you record and you try to put a lot of emotion into the playing, it might not end up on the tape, so you need to have massive feel that you can hear it also from the record. So it was really cool to have him produce the record. We had really good times with him."