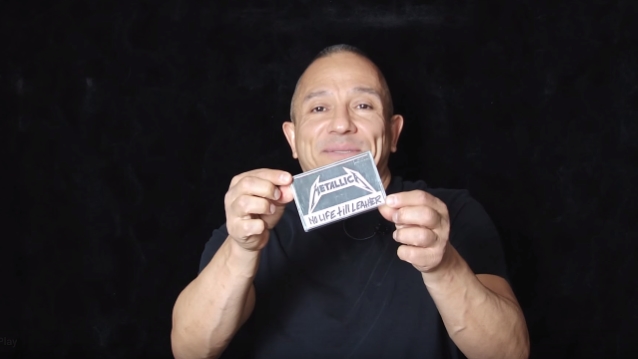 Michael Alago, the New York City native who signed METALLICA to Elektra three and a half decades ago, spoke to the "Juliet: Unexpected" podcast about what it was about the James Hetfield-fronted group that initially caught his attention.

"Well, I [was] out every night as an A&R person," Alago said (hear audio below). "I [was] also meeting with unsigned bands, lawyers and managers in my office every day. In 24 years, I had listened to thousands upon thousands of demo tapes. Over those years, I'd heard lots of good stuff — lots of good stuff — but good ain't great. And if you thought you were gonna sign everybody good, you just can't afford to do that."

He continued: "I saw METALLICA a couple of times before I signed them — I saw them at L'Amour in Brooklyn in '82, I saw them at The Stone in San Francisco in '83. I was friends, who became a close colleague of mine, Jonny [Zazula] at Megaforce Records, had a small independent label, and he said, 'I wanna send you the records we're putting out.' So they were the first METALLICA record, it was also ANTHRAX, and he may have made a RAVEN record. Well, when I heard METALLICA on vinyl, after I saw them those two times, I thought, 'These people are special. They are not doing traditional hard rock [and] heavy metal. They were combining all elements of punk and speed and British heavy metal, American hard rock and metal, into this one thing that they called METALLICA. And those two times that I saw them prior to seeing them summer of '84 at Roseland [in New York], where I actually signed them, I thought, 'These are people who are young and crazy and drink a lot, and they are so focused that it's unbelievable.' And never mind that James Hetfield has always been a wildly charismatic person on stage. And you felt that the minute you walked in the room and saw him on stage. And he knew how to whip a crowd into a frenzy. And I thought, 'Wow! These are people I want in my life.'"

According to Alago, his interest in METALLICA came about after he had entertained the idea of snapping up another of Zazula's artists.

"I was talking to Jonny Z about RAVEN, and I gave RAVEN demo money, because Jon thought, 'Well, they're gonna be so huge, RAVEN, and I just can't do what I need to do with them on an independent label,'" Alago recalled. "The demos that [RAVEN] sent me were fabulous. It just wasn't my thing once I heard METALLICA; all bets were off with everybody. So I saw 'em at Roseland August of '84, I ran backstage, a little drunk, hugging and kissing everybody, and they thought, 'This is an A&R person?' And they took me seriously. The next day, they were in my office in the conference room. We had beer and Chinese food. I gave them cassettes and vinyl. And it just feels like they never left the office, and the rest is history, as we know. That signing helped change the face of hard rock and heavy metal."

Alago said that METALLICA's longevity is proof that the style of music they perform is timeless and is enjoyable to all ages.

"35 years later, they put out that last record, 'Hardwired… To Self-Destruct'," he said. "It's very true to form — it feels like a lot of things from back in the day, from previous records — and they're still playing 30,000-seat stadiums. That's a blessing. And it's a testament to how great someone is."

Alago's journey from humble roots in Brooklyn into the netherworld of downtown New York's music and arts scene of the 1970s and 1980s is the subject of a documentary, "Who The F**k Is That Guy? The Fabulous Journey Of Michael Alago", which came out last year.